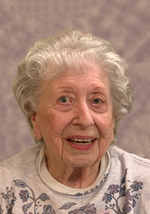 She was employed in the banking industry for over 30 years. Aloyd started her career at the Steedman Bank in Steedman, Mo. as a teller and later worked as a Proofing Administrator for Central Trust Company. She retired from the Callaway Bank in Mokane, Mo.

Aloyd was a member of the Order of the Eastern Star, Fulton Chapter #30 and a member of the Steedman Sunshine Extension Club of Steedman, Mo. Throughout the years, she attended the Foundry Methodist Church of Houston, Tx.

Aloyd’s fondest memories were being surrounded by her family. She enjoyed crocheting and crafting and was also known for her baking. Aloyd had a special chocolate cake that she baked and shared with family at Christmas and for birthday celebrations. She also spent time traveling with her husband to various states throughout the Midwest and the South.

Eugenia was also preceded in death by her parents and her loving husband of 57 years, Erwin.

Graveside services and interment will be held at Steedman Cemetery in Steedman, Mo. in the coming months and will be announced closer to the service time.

In lieu of flowers, memorial contributions are suggested to Masonic Home of Mo.