To share your memory on the wall of Barbara Rippeto, sign in using one of the following options:

Print
Mrs. Barbara Louise Rippeto, age 95, of Jefferson City, Mo., passed away surrounded by her loving family on Monday, March 22, 2021 at her home.

Barbara was born on June 9, 1925 in Jefferson City, Mo. the daughter of Charles Gilbreth and ... Read More
Mrs. Barbara Louise Rippeto, age 95, of Jefferson City, Mo., passed away surrounded by her loving family on Monday, March 22, 2021 at her home.

Barbara was born on June 9, 1925 in Jefferson City, Mo. the daughter of Charles Gilbreth and Cora Fannie Mable (Bugbee) Handley. She was married on March 13, 1942 in Columbia, Mo. to Morris Clifford “Rip” Rippeto, who preceded her in death on March 18, 1993.

A lifelong resident of the Central Missouri area, Barbara was a graduate of Jefferson City High School and continued her education at Jefferson City Business College.

Barbara worked for the State of Missouri until her retirement in 1995. She also worked for her husband’s company, M.C. Rippeto Company, where she was a Partner and Bookkeeper.

Barbara was a member of the Order of the Eastern Star, Jefferson Chapter 496, where she was Worthy Matron and served as Grand Martha in the Grand Chapter, Order of the Eastern Star. She was a member of the Jefferson City China Painting Club and a founding member of Bobo’s Blazing Brushes. She contributed locally, nationally, and internationally through the World Organization of China Painters, and served as President of the Missouri Association of China Painters. A woman of great faith, Barbara was also a member of Concord Baptist Church, where she fulfilled many roles, one of which she was most proud, was decorating for holidays and the church holiday windows.

Barbara was an extremely talented artist and painted beautiful china pieces and sets. She often painted and gifted different china to family, which is a keepsake they will hold onto and cherish forever. Known to the many who loved her as “BoBo”, she rarely missed any of her children’s, grandchildren’s, great grandchildren’s, or great-great grandchildren’s sporting and special events. Barbara had a very charismatic personality and she will be greatly missed by all.

A Celebration of Life will be conducted at Concord Baptist Church on Friday, March 26, 2021 at 11:00 am with the Reverend Dr. Monte Shinkle officiating. Graveside services and interment will be held at Hawthorn Memorial Gardens. The general public is welcome to attend the services while following social distancing guidelines.

A webcast of the service will begin on Friday at 11:00 am for friends and family that are not able to attend by going to her memorial page on Freeman Mortuary’s website and clicking the “photos and videos” tab.
Sympathy cards may be sent to the funeral home or leave condolences online to be given to her family.

To send flowers to the family or plant a tree in memory of Barbara Louise Rippeto, please visit our Heartfelt Sympathies Store.

Kacie reed and Gregg and Otis sent flowers to the family of Barbara Louise Rippeto.
Show you care by sending flowers

Posted Mar 25, 2021 at 09:36pm
My deepest sympathy. With much love and praying during this difficult time.

Gregg and Otis purchased flowers for the family of Barbara Rippeto. Send Flowers

Flowers were purchased and a memorial tree planted for the family of Barbara Rippeto. Send Flowers

Prayers are with you during this sad time. Your mom shared her talents with many through her china painting. She and Fern always asked me to join the group. I appreciated her talent very much. A great lady is in heaven painting flowers for the angels. 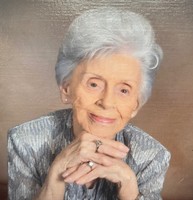