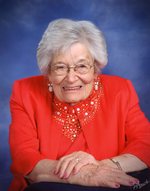 Bea was born November 10, 1921 in Sac County, Ia. a daughter of William and Wilhelmina (Brown) Stadlman.

Bea was a 1939 graduate of Sac City High School. She attended Buena Vista College in Storm Lake, Ia. where she obtained her teacher’s certificate and also studied social work at the University of Missouri.

Bea began her professional career as a teacher before she went into social work for over 35 years. She and Earl moved to Camdenton, Mo. where she became a caseworker in 1949 with the Camden County Division of Welfare until she became the County Director for the Camden County Division of Family Services. In 1961, she became the District Supervisor of the District V Division of Family Services in Boonville, Mo. until 1980 when she moved to Jefferson City, Mo. She retired as a Programs Operations Specialist in 1988.

She was a member of Wesley Methodist Church for almost 40 years. She was active with numerous committees with the church and helped with their meals on wheels program. Bea was proud to be a member of the Beta Sigma Phi Sorority and served as a secretary for her chapter.

Bea was an avid bridge player and loved to read every day. She also treasured the outdoors; tending to her garden and cutting her own grass until the age of 90. She loved to fish and was known to out fish her family. Bea will be remembered for her outgoing personality because she greeted anyone with a smile. She was a very sharp, independent woman that lived each day to the fullest.

She was preceded in death by her parents; her husband of 54 years, Earl Cummins; one son, Craig Cummins on March 26, 1976; two brothers, Gaylord and Paul Stadlman; one sister, Helen Derr.

A funeral service will be conducted at 11:00 a.m. Monday, December 31, 2018 at Wesley United Methodist Church with the Reverend Tom Vansant officiating. Graveside service and interment will be held at Hawthorn Memorial Gardens.