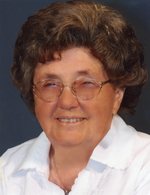 Bessie was born on February 8, 1934 in Jefferson City, Mo., a daughter of the late William Zimmerman and Lillie Mae (Smith) Hoelscher. She was married on April 12, 1952 in Jefferson City to Bruce Vittetoe.

A lifelong resident of the Central Missouri area, Bessie would have graduated in 1952 from Jefferson City High School, instead, she quit as a junior and married the love of her life. She was a stay at home mom and then went to work at the Salvation Army. She earned her GED thirty years later. Bessie spent the rest of her working career for the Department of Motor Vehicles until her retirement in the early nineties.

Bessie followed her mother’s footsteps and became a lifelong solider of the Salvation Army when she accepted Jesus Christ as her Lord and Savior in 1943. She shared her love for Jesus by inspiring young minds as a Sunday School Teacher. She fulfilled several other roles including Cradle Role Sergeant, being on the Women’s Home League, and led doctrine. She enjoyed playing special music on the piano, and singing in the church. Bessie was also a member of the “Senior Singers” where she loved to sing with the others at the Fulton Senior Center.

Bessie cherished all of the time she was able to spend with her family. Bessie captured all of the beautiful moment’s life gave her, never missing a chance to go fishing at Mark Twain and Truman Lakes. Camping with her family at Wildwood and her church family at Camp Mihaska. She also enjoyed beautiful scenery never missing a chance to take a great photo especially, old barns, sunsets and sunrises. Within all of these facets of her time with us, she fostered many lifelong friendships, and cherished each and every one. Most of all she loved her boys and was so proud of them and instilled in them strong Christian values that have served them well. She also loved her grandchildren and spent every chance she had with them. She will be dearly missed and forever in our hearts.

Visitation will be held at Freeman Mortuary from 10:00 to 11:00 a.m. Monday, June 24, 2019 with a celebration of life service following at 11:00 a.m. with Captain Christopher White officiating. Graveside services will be held at Longview Cemetery.

In lieu of flowers, memorial contributions are suggested to the Salvation Army.