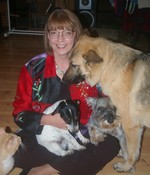 A lifelong resident of the central Missouri area, Beth was a graduate of Jefferson City High School. She went on to receive her Bachelor’s Degree in Education from Lincoln University.

She devoted 25 years to teaching Special Education at Thomas Jefferson Middle School. She enjoyed all of the time she was able to spend with her kids, and she treasured the friendships that she made with all of her students. Beth will be remembered for her caring and loving nature, especially with the students that she taught.

She was a member of First Baptist Church in Jefferson City, Mo.

Beth also loved animals, and she adopted many cats and dogs into her family. Her love for animals did not stop at four-legs, she also spent a lot of time taking care of her chickens and ducks on their land. She found peace being outdoors with animals.

Beth was preceded in death by her parents; one brother, Steven L. Kissinger; and her in-laws: Norman R. Brown, Sr. and Mary Estelle (Knauer) Brown.

A private family memorial will be held at a later time.

In lieu of flowers, memorial contributions are suggested to the Rape and Abuse Crisis Center, P.O. Box 416, Jefferson City, Mo. 65102.