To share your memory on the wall of Betty Crabtree, sign in using one of the following options:

She was married to John M. Crabtree on June 29, 1946 at Mount Vernon Congregational Church in Boston, MA. John passed away in 1989.

A memorial service celebrating her life will be held at 10:00 AM Saturday, June l, 2019 at First Presbyterian Church, 238 Madison Street, Jefferson City, MO with the Reverend Barry Williams and the Reverend Dr. R.W. Beard officiating.

A private interment will be held at Bellerive Gardens Cemetery in St. Louis, MO.

Memorial gifts can be made to First Presbyterian Church or The Food Bank for Central and Northeast Missouri.

To send flowers to the family or plant a tree in memory of Betty Crabtree, please visit our Heartfelt Sympathies Store.

Receive notifications about information and event scheduling for Betty

We encourage you to share your most beloved memories of Betty here, so that the family and other loved ones can always see it. You can upload cherished photographs, or share your favorite stories, and can even comment on those shared by others. 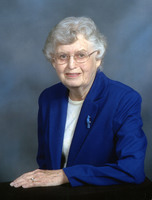