To share your memory on the wall of Bill Camp, sign in using one of the following options:

Provide comfort for the family of Bill Camp with a meaningful gesture of sympathy.

He proudly served our country in the United States Army during the Korean War. He was a combat engineer with the 1st Cavalry Division, 8th Regiment during tours in Korea and Japan and with the 25th Infantry Division, 65th Combat Engineer Battalion during his second tour in Korea. He was honorably discharged as a Sergeant First Class in December 1953. He was recently honored to participate in the Central Missouri Honor Flight Program.

Bill was employed with Westinghouse Electric Corporation and its successor, ABB, Inc. for over 35 years. He was transferred from Sharon, Pa. to Jefferson City in 1971 to help startup operations at the new Westinghouse plant upon its completion in 1972. He retired as the engineering manager of the ABB transformer division in 1992.

He was an active member of First United Methodist Church. Bill served on the Ministry Support Team and helped with the facilities committee “Helping Hands” to keep the church’s building updated.

Bill volunteered his time as a board member of the Missouri Prison Industries, served with the United Way Finance Committee and served on the board with the Dollars for Scholars Program.

He cherished time with his family and love them unconditionally. Bill always put them first in life: attending every event and celebration to cheer on family and more importantly, he was there during any struggle to help lift spirits. When his children were younger, he was a Boy Scout leader, helped with booster clubs, and attended all baseball, track, soccer and football games. When his children were older, he was always willing to help with home renovation projects. During his free time, he enjoyed working in the yard, attending Little Theatre productions and playing poker with his buddies.

He was preceded in death by his parents; one sister, Betty Sexton; and one brother, Jack Camp.

Funeral services will be conducted at 1:30 p.m. Saturday, December 22, 2018 at the First United Methodist Church with the Reverend Daniel Hilty officiating. A reception will follow his service at the church.

Graveside services and interment with military honors will be conducted at 1:00 p.m. Friday, December 28, 2018 at the Georgia National Cemetery in Canton, Georgia.

In lieu of flowers, memorial contributions are suggested to the Special Learning Center or the charity of the donor’s choice.

To send flowers to the family or plant a tree in memory of Bill P. Camp, please visit our Heartfelt Sympathies Store.

Receive notifications about information and event scheduling for Bill

We encourage you to share your most beloved memories of Bill here, so that the family and other loved ones can always see it. You can upload cherished photographs, or share your favorite stories, and can even comment on those shared by others.

Elizabeth and Mike Quillin and US Venture Friends and Family have sent flowers to the family of Bill P. Camp.
Show you care by sending flowers

Posted Dec 28, 2018 at 05:28pm
Dear Harriet...sending my condolences to you and your boys ...Bill was such a nice man and so good to everyone. Sending love to you from the Oregon coast where I now live close to my boys and their families. Nancy Sappington Jones
Comment Share
Share via:
HS

Posted Dec 27, 2018 at 08:19pm
Dear Harriet, Cheryl, Greg, Roger and Russell; You are in our thoughts and prayers. Many fond memories of the Camp's and Becker's over the years. Skip and Carol (Miller) Becker.
Comment Share
Share via:
LM

Posted Dec 27, 2018 at 10:31am
Dear Harriet and Family: we were so sad to hear of Bill's passing! You were the best neighbors and we have missed you ever since we moved to the St. Louis area. You are in our thoughts and prayers at this difficult time. Bo and Linda Matisziw
Comment Share
Share via:
HS

Posted Dec 23, 2018 at 11:20am
Sending our deepest sympathies for your loss. We haven't seen Bill since the Westinghouse reunion in Jeff. City all those years ago, but always enjoyed exchanging emails with Bill and Harriet. We have such very fond and fun memories of all the Sharon/Jefferson City Westinghouse families endearing forever friendships. We'll miss you.
Bob Manes, and Linda Manes, Tampa, Florida.
Comment Share
Share via: 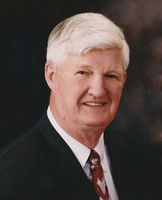