To share your memory on the wall of Bob Miserez, sign in using one of the following options:

Print
Robert V. Miserez, 66, passed away Wednesday, May 12, at his home following a brief illness.

He was born October 13, 1954, in West Point, Nebraska, the son of Virgil H. and Marjorie F. (Johnson) Miserez, and he grew up in Dodge, Nebraska... Read More
Robert V. Miserez, 66, passed away Wednesday, May 12, at his home following a brief illness.

He was born October 13, 1954, in West Point, Nebraska, the son of Virgil H. and Marjorie F. (Johnson) Miserez, and he grew up in Dodge, Nebraska.

He was married April 27, 1996, to Irma Rene Bagnull, and they recently celebrated their 25th anniversary.

He was a graduate of Dodge High School and a 1977 graduate of the University of Nebraska-Lincoln majoring in Political Science and History.

Upon moving to Missouri in 1982, Bob began his career as a Business Development Specialist with the Missouri Department of Economic Development, and he was the DED liaison to what is now known as the Missouri Development Finance Board. He became the Board’s Executive Director and first employee in 1989, and he dedicated his nearly 40-year career to the betterment of Missouri.

Bob helped structure financings for infrastructure and economic development projects throughout Missouri, and his fingerprints are on projects ranging from small town water towers and sidewalks to private company expansions and to large scale Union Station in Kansas City and Ballpark Village in St. Louis. Some of the projects with more personal meaning to Bob were St. Patrick Center in St. Louis, which provided culinary arts training to low income residents; the Salvation Army of Greater Kansas City, which provided jobs for rehabilitation of men with substance abuse problems; and Forest Park Forever improvements to infrastructure of the St. Louis landmark. Bob’s guiding principle was to “do the right thing for the right reasons.”

Bob truly enjoyed our country’s national parks and looked forward to visiting more of them in retirement. He visited several with family and motorcycle buddies, and he appreciated the beautiful and diverse scenery. As his brief illness progressed, he enjoyed watching travel videos of the parks.

He loved his daughter unconditionally, and she made him immensely proud. He often reminisced on their daddy/daughter days when she was younger, when the day’s activities included Mel’s Diner, Barnes & Noble, the barber, and a visit to Central Dairy.

In addition to his wife, survivors include: his daughter, Laura Miserez, and her fiancé, Nick Higginbotham, both of St. Louis, MO; brother, Joe Aerisolphal of Kansas City, MO; sisters, Betty Miserez of Omaha, NE, and Darlene Moorman of Gardnerville, NV; and brothers- and sisters-in-law Gary and Julie Bagnull, Rick and Lori Higgins, and Alan Bagnull, all of Jefferson City.

Funeral services will be conducted at 11:00 a.m. Wednesday, May 19, 2021, at Central United Church of Christ with the Reverend Dr. Judith Scott officiating. Graveside services and interment will be held at Riverview Cemetery.

A livesteam of Bob’s service will begin at 11:00 a.m. Wednesday for friends who are not able to attend by going to the "photos and videos" tab of this page and scrolling down to the webcasting link.

To send flowers to the family or plant a tree in memory of Bob Miserez, please visit our Heartfelt Sympathies Store.

Receive notifications about information and event scheduling for Bob

We encourage you to share your most beloved memories of Bob here, so that the family and other loved ones can always see it. You can upload cherished photographs, or share your favorite stories, and can even comment on those shared by others.

The Higginbothams, Betty and Darlene, and other have sent flowers to the family of Bob Miserez.
Show you care by sending flowers

Laura - I am sorry for your loss. Hope all is well for you today. from Dana DeChant formerly Dana Weider
MH

Posted May 19, 2021 at 12:53pm
I had the sincere pleasure of working with Bob on the Missouri D.R.E.A.M. project and it was a tremendous experience. He always knew the best restaurants! My heartfelt thanks to him and my condolences to his family and the long list of people who knew and loved him. He will be missed.

Posted May 18, 2021 at 09:38am
Our heartfelt condolences to you and your family during this time of sorrow. You are in our thoughts and prayers.

The Higginbothams purchased the The FTD Faithful Blessings Bouquet and planted a memorial tree for the family of Bob Miserez. Send Flowers

Posted May 17, 2021 at 07:38pm
Bob made a difference in Missouri, and the many projects that his work thru MDFB did in Kansas City, Mo. I had the pleasure to work with Bob on several projects during the Mayor Cleaver era in KCMO in the 90's and early 2000's. Recently we served on the Missouri Economic Development Financing Board (MEDFA). Bob was always thoughtful, a Gentleman, and we shared in some fun events. I and many will miss Bob. My sincere sympathies and blessings to the family.
Bob Mayer
Kansas City, Missouri
Comment Share
Share via: 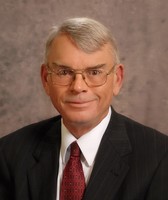