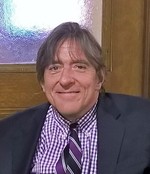 He was born September 5, 1961 in St. Louis to Laurance P. and Audrey Wood Berri. He received a BA in Journalism from George Washington University in 1985 and a JD from the Washington University (St. Louis) School of Law in 1988. He then relocated to Jefferson City to serve as law clerk to the Honorable Andrew Jackson Higgins, Chief Justice of the Missouri Supreme Court.

After a year with the Court, he went on to work at the Office of the Secretary of State for more than ten years, first as a securities attorney, then later as counsel serving the elections division, the franchise tax unit and the administrative rules divisions. In 1998, Berri took a year’s sabbatical from the office during which he earned a Masters’ Degree in Public Administration from Harvard University’s Kennedy School of Government. He finished his tenure with the office as legislative liaison.

In 2001, Berri went to work as an Assistant Attorney General under former Attorney General Jay Nixon, serving as legislative liaison, and working on special litigation, including a variety of administrative and appellate work. In January 2009, Berri became legislative liaison for the Office of Administration under the new administration of Governor Nixon. He served in that capacity until Governor Nixon appointed him to a six- year term at the Administrative Hearing Commission in July of 2015 where he served until his death.

Brett is survived by his sister, Linda Wood Berri, his brother, Paul E. Berri, his nieces Allison Treadway and Susannah Reynolds, nephews-in-law, great nieces and nephews, and his dog, Penny. Brett was a courageous, capable and kind human being who will be greatly missed by all with whom he came in contact.

Visitation will be held Thursday, January 31, 2019 from 4:00 until 7:00 pm at Freeman Mortuary, 915 Madison Street, Jefferson City, Mo. Funeral services will be private.

In lieu of flowers, contributions may be made to a favorite charity, or to the Missouri Department of Conservation for the purpose of planting a tree in Brett’s honor.