To share your memory on the wall of Calvin Case, sign in using one of the following options:

He was born on September 9, 1930 in Carter, Ne. the son of Harry Logan and... Read More
Mr. Calvin Dean Case, age 89, of Centertown, Mo. passed away Wednesday, August 19, 2020 at Harry S Truman Veterans Hospital in Columbia, Mo. surrounded by family.

He was married on March 21, 1952 in Las Cruces, Nm. to Bonnie Jean Moxham who passed away recently on May 13, 2020. After 68 years of marriage his family finds peace that both Calvin and Bonnie were not separated long in this world.

Calvin was a 1948 graduate of Alma High School in Alma, Ne. Calvin served in the United States Army during the Korean War and was stationed in San Francisco. After the war, Calvin worked for Burlington Northern Railroad before joining the Longmont Co police force.

Calvin served in law enforcement for 24 years in Longmont, Co. Calvin possessed a strong work ethic and during his tenure worked his way from a patrolman, detective in several areas, and eventually retired as Acting Director of Police Longmont Co.

Calvin served as a Deacon at the Valley Christian Church in Bullhead, Az. He and his wife loved to square dance in their free time and he was co-president of the Hicks ‘N Chicks square dance club.

Calvin was a man of many talents. He was an avid outdoorsman who loved taking motorcycle rides, camping trips, and fishing trips with family. Some of his best times were family trips to Arizona, Nevada, Canada, Oregon and New Mexico spending time outdoors with them. He enjoyed riding on his motorcycle, photography, gardening, teaching his kids how to fish from his yellow canoe and catching trout. He had a passion for woodworking and was always tinkering with numerous things around the house to fix them. He even built his own camper for the family camping trips.

Calvin will be remembered for his integrity and his ability to always find the best in people. He was a patient man who had a quiet way of working through problems and taught his children to be problem solvers.

He was preceded in death by his parents; his wife, Bonnie; two sons, Alan and Ron Case; brother, Ivan Case; and sister, Irene Smith.

Due to the COVID pandemic, a private funeral service will be held Sunday, August 23, 2020 in the Freeman Chapel with Malcam Moberly officiating.

A webcast of his service will begin at 11:00 a.m. (Central Standard Time) Sunday, August 23, 2020 for friends that are not able to attend by going to his memorial page on Freeman Mortuary’s website. Friends may mail sympathy cards to the funeral home or leave condolences online to be given to his family.

To send flowers to the family or plant a tree in memory of Calvin Dean Case, please visit our Heartfelt Sympathies Store.

Receive notifications about information and event scheduling for Calvin

We encourage you to share your most beloved memories of Calvin here, so that the family and other loved ones can always see it. You can upload cherished photographs, or share your favorite stories, and can even comment on those shared by others.

WRBC Tailgaters, Loren and Stephanie Martin, and other have sent flowers to the family of Calvin Dean Case.
Show you care by sending flowers

WRBC Tailgaters purchased the The FTD Comfort Planter for the family of Calvin Case. Send Flowers

Posted Aug 23, 2020 at 01:07pm
To the family of Calvin and Bonnie Case. I wanted to extend my heartfelt condolences to you at the recent passing of both. I just learned of both. My sister in Longmont saw the notice and made we aware. I was blessed to watch the service for Mr Case. I remember your parents with extreme fondness and affection. My teenage years were made better by them. I still miss my best friend Alan. May He who is able bless your families richly. God bless.

Jim you have been a big part of our lives. We all remember you with much fondness in our hearts. Over the years our family has remembered many stories of you and Alan. Thank you for your thoughtfulness and for being with is today. Linda
KJ

Thank you Jim! My daddy would absolutely light up telling us stories of your years together!
SR

Posted Aug 23, 2020 at 09:17am
It was a great privilege to have Calvin as a friend. He was the most sincere man you could ever know. A man dedicated to his family. A loving man who was so proud of each and every member of his family.
He was a man who would go out of his way to bring a smile to your face. A man full of grace and wisdom. We are sad and will miss him, but we are glad that he is with his Lord, Jesus and reunited with his beloved wife, Bonnie, who truly was his life-long partner. From Gary and Sarah Rogers and friends of New Hope Baptist Church.
Comment Share
Share via:
LH

sarah thank so much for your kind words. We are all missing mom and dad so very much. The church family ment so much to them.
LH

sarah thank so much for your kind words. We are all missing mom and dad so very much. The church family ment so much to them.
LH

sarah thank so much for your kind words. We are all missing mom and dad so very much. The church family ment so much to them.
3 Comments | Show All
HS

Posted Aug 21, 2020 at 04:39pm
Please accept our most heartfelt sympathies for your loss... Our thoughts are with you and your family during this difficult time.

Flowers were purchased for the family of Calvin Case. Send Flowers 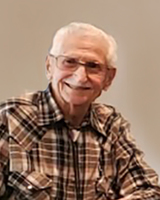