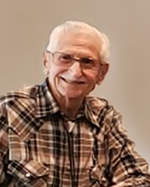 He was married on March 21, 1952 in Las Cruces, Nm. to Bonnie Jean Moxham who passed away recently on May 13, 2020. After 68 years of marriage his family finds peace that both Calvin and Bonnie were not separated long in this world.

Calvin was a 1948 graduate of Alma High School in Alma, Ne. Calvin served in the United States Army during the Korean War and was stationed in San Francisco. After the war, Calvin worked for Burlington Northern Railroad before joining the Longmont Co police force.

Calvin served in law enforcement for 24 years in Longmont, Co. Calvin possessed a strong work ethic and during his tenure worked his way from a patrolman, detective in several areas, and eventually retired as Acting Director of Police Longmont Co.

Calvin served as a Deacon at the Valley Christian Church in Bullhead, Az. He and his wife loved to square dance in their free time and he was co-president of the Hicks ‘N Chicks square dance club.

Calvin was a man of many talents. He was an avid outdoorsman who loved taking motorcycle rides, camping trips, and fishing trips with family. Some of his best times were family trips to Arizona, Nevada, Canada, Oregon and New Mexico spending time outdoors with them. He enjoyed riding on his motorcycle, photography, gardening, teaching his kids how to fish from his yellow canoe and catching trout. He had a passion for woodworking and was always tinkering with numerous things around the house to fix them. He even built his own camper for the family camping trips.

Calvin will be remembered for his integrity and his ability to always find the best in people. He was a patient man who had a quiet way of working through problems and taught his children to be problem solvers.

He was preceded in death by his parents; his wife, Bonnie; two sons, Alan and Ron Case; brother, Ivan Case; and sister, Irene Smith.

Due to the COVID pandemic, a private funeral service will be held Sunday, August 23, 2020 in the Freeman Chapel with Malcam Moberly officiating.

A webcast of his service will begin at 11:00 a.m. (Central Standard Time) Sunday, August 23, 2020 for friends that are not able to attend by going to his memorial page on Freeman Mortuary’s website. Friends may mail sympathy cards to the funeral home or leave condolences online to be given to his family.