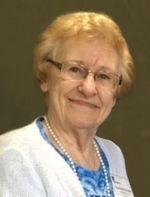 She was born July 28, 1932 in Jackson, MO, the daughter of the late Elmer H. Luehring and Elizabeth L. (Lishman) Luehring.

After raising her two sons, she was employed by the American Red Cross and worked the blood mobile at various locations in mid-Missouri for five years. Later she volunteered as a nurse for the Cole County Health Department from 1978 -1997.

She was member of Trinity Lutheran Church since 1965. She volunteered there as a Sunday School teacher for many years. She was a member of the Circle Six.

Charleen enjoyed traveling with her late husband Charles. She collected pencils from many locations around the country and world. She gave programs to groups based on her extensive pencil collection. She was a member of the American Pencil Collectors Society and attended national conventions. She also enjoyed and shared an extensive collection of cherished teddy bears and stuffed teddy bears of various forms and decorations. She was an avid reader and followed the St. Louis Cardinals. For the past six years, Charleen was part of the Heisinger Bluffs community where she enjoyed time with residents, bingo and drums alive. She cherished most, however, the time and love that she shared abundantly with her family, especially her three granddaughters.

A memorial service will be held at 11:30am Saturday, August 24, 2019 at Freeman Mortuary with Chaplain Jim Mueller of Heisinger Bluffs officiating.