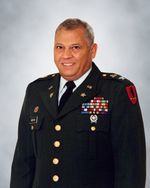 He graduated from Campbell High School in 1959 and received his bachelor’s degree in business administration from the Columbia College in Columbia, Mo. in 1974. During his time in the military, Bob furthered his education through the Engineer Officer Advanced Course, Finance Officer Advance Course, the Adjutant General Officer Advanced Course, U.S. Army Commander and Staff College, and the Industrial College of the Armed Forces.

Bob enlisted in the United States Army and proudly served his country for almost 38 years from 1959 until 1997. He served 3 years in the Pentagon and saw duty in 19 countries. The United States Senate confirmed him to be Brigadier General on April 25, 1995, which was read into the U.S. Congressional Record. His numerous military awards included the Legion of Merit with Oak Leaf Cluster.

Bob is a member of Concord Baptist Church in Jefferson City and the American Legion, Roscoe Enloe Post 5. He has been an active Mason throughout his life being a member of the Jefferson Lodge #43 A.F. & A.M., Valley of St. Louis A.A.S.R., Sword of Bunker Hill, National Sojourners, A.A.O.N.M.S. Moolah Shriner, Moolah Shriner Air Patrol, and the Capital Shrine Club.

He was preceded in death by his parents; his brothers, William “Bill” Morgan and Thomas “Tommy” Morgan; one sister, Elizabeth (Morgan) Thacker.

A funeral service will be conducted at 11:00 a.m. Monday, September 23, 2019 at Concord Baptist Church with the Reverend Dr. Monte Shinkle officiating. Graveside services and interment with military honors will be held at Riverview Cemetery.

In lieu of flowers, memorial contributions are suggested to Shiners Hospitals for Children or St. Jude Children’s Research Hospital.