To share your memory on the wall of Connie Bean, sign in using one of the following options:

Connie was born on September 7, 1938 in Bloomfield, Mo., the daughter of Paul Bland and Margriete Katherine (Baker) Cox. She was married on September 6, 1956 in Dexter, Mo. to Willard L. Bean, who survives.

Connie grew up in Dexter, Mo. and was a 1956 graduate of Dexter High School.

Shortly after graduation, she married Willard, and began her role as a supportive military wife. She moved with him to quite a few locations until, in 1968, they made Jefferson City their permanent home. She took great pride in his service that spanned over 40 years until his retirement as a Colonel from the Missouri Army National Guard. However, her greatest accomplishment was being a mother and later a grandmother; always supporting and encouraging her children in all aspects of their lives.

Connie was a devoted housewife all her life. When her children were younger, she owned a beauty salon in Dexter. After moving to Jefferson City, she volunteered as a Girl Scout Leader at West School. One of her favorite mottos was, “Be Prepared”. Connie enjoyed working with cosmetics in a few downtown retail stores and also worked as a Financial Secretary at the First Christian Church.

Connie was creative and channeled that energy different ways. She enjoyed oil painting, working with ceramics, and sewing. She especially enjoyed visiting Branson and the Fall Craft Festival. Connie was very talented and enjoyed designing and decorating five beautiful homes with her husband Willard. She also took pride in designing the landscape and personally planting everything with Willard.

Connie was preceded in death by her parents.

Visitation will be held at Freeman Mortuary from 12:00 p.m. until 1:30 p.m. Tuesday, December 17, 2019 with her funeral service following at 1:30 p.m. in the Freeman Chapel with Celebrant Gara Loskill officiating. Graveside services and entombment will be held at the Mausoleum of Hawthorn Memorial Gardens.

In lieu of flowers, memorial contributions are suggested to St. Jude Children’s Research Hospital or Shriners Hospitals for Children.

To send flowers to the family or plant a tree in memory of Connie Bean, please visit our Heartfelt Sympathies Store.

We encourage you to share your most beloved memories of Connie here, so that the family and other loved ones can always see it. You can upload cherished photographs, or share your favorite stories, and can even comment on those shared by others.

Posted Dec 13, 2019 at 02:52pm
Dear Teri, Doug, and family,
I’m so sorry for the passing of your beloved mom.
May peace be with you, and the memories be heartfelt.
With all my love,
Bronda Karp
Comment Share
Share via: 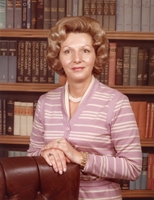