To share your memory on the wall of David Schulte, sign in using one of the following options:

A lifelong resident of the central Missouri area, Dave was a 1965 graduate of Helias High School. He received a Bachelor’s Degree in Physics and Mathematics from Lincoln University.

He proudly served as a Sergeant in the United States Marine Corps during the Vietnam War. From his service to our country, Dave was a proud veteran and a member of the Samuel F. Gearhart Detachment of the Marine Corps League; American Legion, Roscoe Enloe Post 5; and Veteran of Foreign Wars, Basinger/Sone Memorial Post.

Dave was an incredibly social family man. He enjoyed his time with friends hosting gatherings and entertaining guests. He and his wife, Rita, looked forward to their monthly “haircut Thursdays” which included meeting up with friends, having a drink at the Town Club in Westphalia or Eisterhold’s in Rich Fountain and of course, haircuts. Dave kept his mind sharp with crossword puzzles and liked to golf at Turkey Creek. He took charge of many events through his various club affiliations including the Marine Corps League BBQ. He was a master on the grill. Dave was a man who never met a stranger, to know him was to love him and to be cared for by him. He was passionate about helping children and was dedicated to doing his part through many organizations over the years. Dave always had a project and kept himself busy piddling with something at all times. His favorite place to spend time was at their farm. He loved being in nature, fishing, burning brush and clearing trees or just spending time with the most important people in his life, his family. He was especially fond of his grandchildren. Dave was happy and always wore a smile. Some may fondly remember Dave as a practical jokster or the man that constantly pestered. He loved to have a good time, toss back a cold one and laugh with those he loved. Dave was an exceptional husband, father, grandfather, friend and Marine. He truly cared about people and was a friend to all.

Funeral services will be conducted at 12:00 p.m. Wednesday, November 25, 2020 in the Freeman Chapel with the Reverend Father Anthony Viviano officiating. Graveside services and interment with military honors will be held at Resurrection Cemetery.

A webcast of Dave’s service will begin at 11:45 a.m. Wednesday for friends that are not able to attend by going to his memorial page on Freeman Mortuary’s website.

To send flowers to the family or plant a tree in memory of David L. Schulte, please visit our Heartfelt Sympathies Store.

Receive notifications about information and event scheduling for David

Posted Nov 30, 2020 at 05:40pm
So sorry to hear of the passing of Dave. He was a good friend, and Gerald grew up with him in the neighborhood. They always played "army" in the woods on Laurel Drive. He was a true patriot, and Gerald considered him a continuance of the greatest generation. He will be sadly missed by all who knew him. Prayers and sympathy for the family. God bless all of you. - Gerald and Marsha Taylor
Comment Share
Share via:
MP

Posted Nov 25, 2020 at 02:15pm
I had the privilege of working with Dave at the Department of Corrections. He was a great guy who was fair and honest. It was always a pleasure to be around him. Your family should be very proud of the lasting impact he has made on so many in his lifetime. Have peace, Dave.
Comment Share
Share via:

Posted Nov 25, 2020 at 01:44pm
So sorry to hear the about Dave. He was like a second Dad to us. Always there for us McILwain girls. I really enjoyed our monthly visits when he came in for Massage Therapy. Would talk just a little about everything. His smile could light up the room. I or we were so blessed to have the time with him that we did. I’m sure him and Dad (Jimmy Mac) are having a good ol’time up there. We will meet again. RIP Marine and Semper Fi.
Comment Share
Share via:
CC

Posted Nov 25, 2020 at 10:58am
I am so sorry for your loss. I was a classmate of David’s. He would come to our class lunches and he was so informative. He knew what was going on all over town, I was amazed at how much he knew. He was so much fun. Prayers for the family and the class of 1965 will not be the same without him. Love to you all.

Posted Nov 24, 2020 at 09:06pm
Please accept our most heartfelt sympathies for your loss. We are grateful to have had the chance to know Dave. He was a kind and gentle soul. 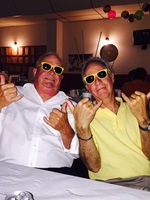 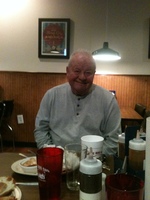