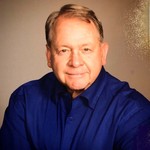 He was married on April 1, 1978, at Jefferson City, MO, to Cindy Lou Windham, who survives him in death.

A proud life-long resident of Missouri, Denny was raised in Jefferson City, MO. He graduated from Helias Catholic High School, class of 1967. He attended Rockhurst College in Kansas City, MO for one year before transferring to The University of Tulsa. At Tulsa, he was a member of Kappa Sigma Fraternity and graduated in 1972 with a degree in Business Economics. He was drafted into and served in the United States Army from 1972 through 1974. Denny was proudly employed his entire professional life by Hallmark Cards, Inc. for thirty-five years prior to his retirement in 2009. His career was primarily spent as buyer, attaining the title of Global Procurement Director, amongst others.

He was a parishioner of Our Lady of the Presentation Catholic Church in Lee's Summit, MO. A member of The Knights of Columbus and former boy’s parochial league basketball coach. He was also a key member and fundraiser for at least 4 capital building campaigns at Presentation-the sanctuary itself, but also the school, gymnasium and parish ministry facilities.

He was preceded in death by two brothers: Timothy McCurren and Michael McCurren, both of Jefferson City, MO

In lieu of flowers, his family asks that donations be made in his name to Children's Mercy Hospital of Kansas City, MO: Department of Philanthropy, 2401 Gillham Rd, KCMO, 64108 or visit https://www.childrensmercy.org/help-our-kids/