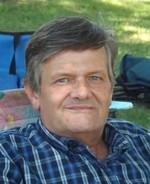 Dennis was born July 9, 1960 in Jefferson City, Mo. the son of Nelson Raymond and Carol Louise (Sapp) Porter. He was married on September 20, 1980 in Centertown, Mo. to Brenda Gail Moore.

A lifelong resident of the central Missouri area, Dennis was a 1978 graduate of Russellville High School.

Dennis worked in the manufacturing industry for over 35 years. He was the shift supervisor for third shift at ABB for 25 years. Following his career with ABB, he was employed with AP Green and ALPLA Inc. During his retirement, Dennis was proud to be the “on-call” Papaw to help with his grandchildren.

Dennis was a Deacon and a life long member in good standing at the First Baptist Church of Elston. He dedicated his time to being a youth leader as well as choir member. Dennis cherished the relationships he built within his church and the Elston community.

To Dennis, the most important things in life were his faith, family and the great outdoors. He loved hunting, fishing, mushroom hunting and anything else that kept him out in nature. Dennis was a member of the Moniteau County Hunting Club. He had a deep appreciation for God’s creation and especially loved traveling out west to see the mountains. He loved to tinker and keep himself busy with little projects and jobs.

He was dedicated to his family and enjoyed nothing more than spending time with his children, grandchildren, brothers, cousins, nephews and nieces. For Dennis, there wasn’t much better than getting to combine his favorite things by spending time with family out in the country.

He was preceded in death by his father, Nelson Raymond Porter on November 4, 2011.

Visitation will be held at Freeman Mortuary from 4:00 p.m. until 6:00 p.m. Tuesday, November 24, 2020 with a Celebration of Dennis’ Life immediately following at 6:00 p.m. Tuesday in the Freeman Chapel. Anyone in attendance is required to wear a protective mask.

A webcast of the funeral service will begin at 5:45 p.m. Tuesday for friends that are not able to attend by going to the "photos and videos" tab of this memorial page and scrolling down to the webcasting link.

Graveside services and interment will be held at 12:00 p.m. Wednesday, November 25, 2020 at Enloe Cemetery with the Reverend Verlyn Bergen officiating.

In lieu of flowers, memorial contributions are suggested to the Callaway Hills Animal Shelter. Friends may mail sympathy cards to the funeral home or leave condolences online to be given to his family.