To share your memory on the wall of Donald Luebbert, sign in using one of the following options:

He was born on December 12, 1948 in Jefferson City, Mo., the son of Lawrence and Roseline (Kloep... Read More
Donald Louis Luebbert, age 70 years, of Linn, Mo., passed away on September 22, 2019 at Ashland Healthcare surrounded by his loving family.

He was born on December 12, 1948 in Jefferson City, Mo., the son of Lawrence and Roseline (Kloeppel) Luebbert. He was married to Shirley Wilson and to this marriage his two sons were born. He later was married in October 1997 in Linn, Mo. to Wanda Brummett, who preceded him in death in 2006.

Don was a 1967 graduate of Fatima High School. He went on to earn a degree from McHenry County College in McHenry, Illinois in1973 and later continued his education at SMSU in Springfield, Mo., graduating in 1980.

Don proudly served his country in the United States Navy. He fought in the Vietnam War and was honorably discharged in 1972. Don went on to be over-the-road truckdriver for over 20 years until ill heath forced his retirement in 2003.

From a young age, Don found solace in nature. As a boy growing up on the farm, he loved to explore the land. Don liked to spend time outdoors hunting and fishing and was even known to fish without bait, or “wetting the hook”, as we he called it, in his later years because he enjoyed the experience of fishing more than he cared about the catch. He was known to rent a canoe and float the Gasconade River. He also loved to capture wildlife and scenery through the lens of his camera. He further demonstrated his creative side as a gifted craftsman in the wood shop and an expert model builder. Don loved the freeing sensation of riding his Harley Davidson motorcycle out on the open road and was proud to be involved with the Freedom of the Road Riders. He had a deep interest in Native American history which was further nurtured by his wife, Wanda, as she was Cherokee and Apache. Don was a man of honor and a proud veteran with a good sense of humor. He cherished his family and will be greatly missed by all who knew him.

Don was preceded in death by his parents, Lawrence and Roseline Luebbert; and his loving wife, Wanda Luebbert.

A celebration of Don’s life, including military honors will be conducted at 11:30 am on October 5, 2019 at the American Legion Post 317 in Freeburg, Mo.

To send flowers to the family or plant a tree in memory of Donald Louis Luebbert, please visit our Heartfelt Sympathies Store.

There are no events scheduled. You can still show your support by sending flowers directly to the family, or planting a memorial tree in memory of Donald Louis Luebbert.
Visit the Heartfelt Sympathies Store 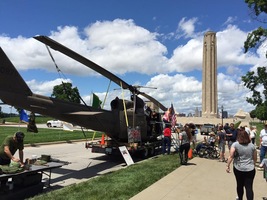