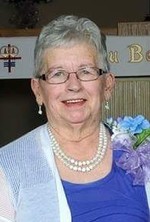 A lifelong resident of the central Missouri area, Donna was a 1961 graduate of Jefferson City High School. She started her employment with various positions at Capital Theater and Employment Security. After a number of years out of the workforce, she worked with St. Mary’s Health Center as a pediatric CNA, a position she cherished for over 20 years.

Donna volunteered for several organizations, including Trinity Lutheran School, Blair Oaks and the Red Cross. She was also a member of Trinity Lutheran Church and the ladies auxiliary.
Donna was a quiet person, but she had a great sense of humor. Her dry wit will be remembered by those that knew her well. She loved pulling pranks with her sisters, Judy and Alice, including making humorous calls to a local radio show. Donna also enjoyed shopping for a good deal and playing bingo. But family was always the center of her life, and she loved going to her grandkid’s events, games and concerts.

Those desiring may make memorial contributions to the Breast Cancer Research Foundation or Preferred Hospice.