To share your memory on the wall of Donna Watson, sign in using one of the following options:

Provide comfort for the family of Donna Watson with a meaningful gesture of sympathy.

A lifelong resident of the Central Missouri area, Donna was a 1975 graduate of Fatima High School in Westphalia, Mo.

She enjoyed quilting and was a member of the Sacred Heart Quilting Club. Her other interests included traveling to Tunica and Las Vegas, pool days with family and friends, girls weekend trips, and Ma Ma’s Day Camps. Most importantly, she cherished her time with family and friends and spoiling her children and grandchildren.

She was preceded in death by her first husband and her father.

A memorial service will be conducted at 11:00 am Friday, March 15, 2019 at Sacred Heart Catholic Church with the Reverend William Debo officiating. Private entombment will be in the Mausoleum of Resurrection Cemetery.

In lieu of flowers, memorial contributions are suggested to the Sacred Heart Quilting Club.

We encourage you to share your most beloved memories of Donna here, so that the family and other loved ones can always see it. You can upload cherished photographs, or share your favorite stories, and can even comment on those shared by others.

James Maida, Kevin Mullally, Blaine Preston & the , Shad, Yuan, Serena & Kel, and others have sent flowers to the family of Donna K. Watson.
Show you care by sending flowers

Guaranteed hand delivery by a local florist
B

Posted Mar 15, 2019 at 11:26am
My condolences to Donna's family and friends. Prayer to God for comfort and your precious memories will help you
to get through this difficult time. Trust in God for comfort. He will help because God cares for you.
1Peter 5:6,7
Comment Share
Share via:
J

Posted Mar 13, 2019 at 05:44pm
Sent with loving memory of Donna Watson along with thoughts of peace and courage and many great memories.

Posted Mar 13, 2019 at 10:40am
So very sad to learn of Donna’s death. She was 9ne if my first best friends when I moved to Missouri in 1978. We had many great times together and went through some not so great times together. Prayers for all her family, especially Jim, Allison & family, Tim & family, Tonya & family, Marci, Debbie & Donna’s brothers and families. Rest In Peace Donna, you are truly a sister of my heart. I love you & will miss you!
Comment Share
Share via:
SK 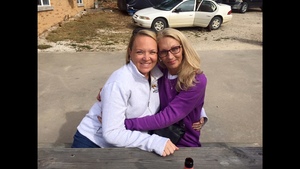