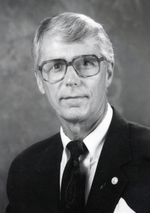 He was born on January 3, 1933, the son of Ralph and Lillian (Kuper) Scott. He was married on June 13, 1958, to Paddy Hanna and to this marriage his three children were born. He was later married to Sheila Larkin on July 21, 1990, in Jefferson City, Mo., who survives at the home.

Dr. Scott graduated from Jefferson City High School in 1951 and then began his college career at Jefferson City Junior College, where in 1953 he received an associate degree. After graduation he enlisted in the United States Navy, where he served as an electronics technician during the Korean War, until he was honorably discharged in 1957.

After his service in the Navy, Dr. Scott went back to school and attended Western Washington State University, graduating with a Bachelor’s Degree in Math and Social Studies in 1960, and later received his Master’s Degree in Educational Psychology in 1962. Following Western Washington State University, Dr. Scott went on to the University of Minnesota and graduated in 1965 with his Doctorate in Counseling Psychology.

Dr. Scott began his professional tenure in education in 1960, teaching junior high school in Maple Valley, Washington, while attending graduate school. After completing his doctorate, Dr. Scott became the director of guidance and counseling at Minot State University in North Dakota. In 1967, he was offered a full professorship at Lincoln University, serving as the first head of the newly created Department of Psychology. During his tenure at Lincoln, Dr. Scott served as Head of the Department of Education and Psychology, Director of Continuing Education, and Dean of Graduate Studies and Continuing Education. In 1995, Dr. Scott retired from LU with the title Professor Emeritus. In 2003, he received the Professor Emeritus Service Award at the 1st Annual President’s Awards/Recognition Gala.

Dr. Scott, with assistance from his co-workers, accomplished many things while at Lincoln. He developed Lincoln University’s major program in psychology, developed the dual credit program in area high schools, and assisted in the development of the nursing program and other courses at Fort Leonard Wood. He was also instrumental in setting up the L.U. Information Office in downtown Jefferson City, expanding off-campus course offerings, establishing the Liberal Studies program, and the Learning in Retirement program. Dr. Scott also led the way toward the initial accreditation of the graduate education program.

One of Dr. Scott’s major accomplishments was his establishment of the Learning in Retirement (LIR) organization in Jefferson City in 1992. LIR was the first such organization in Missouri, and one of the first in the country. He was on the National Advisory Committee of the Elderhostel Network, which offered week-long classes at colleges and universities. He saw a need for such an organization on a local level. Today 28 years later, there are over 400 members of this vital, active organization.

Dr. Scott was a dedicated Christian, who held a deeply passionate and saving faith in Jesus Christ. This trust in his savior guided many of his principles in life. He was an active member at First United Methodist Church, Jefferson City, where he served on the Board of Trustees, sang in the church choir and was a beloved member of the Odyssey Sunday School Class. Gary also volunteered as a big brother through the Big Brothers Big Sisters program of Jefferson City.

Dr. Scott was an avid fitness enthusiast and enjoyed playing golf and tennis. He could always be found at the Jefferson City YMCA, working out or running. He was a gifted vocalist and had an ear for music, singing in many quartets. He and Sheila also loved traveling the world and spending time with family. He had a passion for life and always enjoyed every moment.

He was preceded in death by his parents; one grandson, Matthew Dawdy; an uncle, Homer Kuper; a nephew, James Ralph Asberry; and a great nephew, John McCutchen.

Due to the COVID-19 pandemic, a private funeral service will be conducted in the Freeman Chapel with the Reverend Trevor Dancer officiating. Graveside services and interment with military honors will be held at Cadet Creek Cemetery near Bonnots Mill, Mo.

A webcast of the funeral service will begin at 12:00 p.m. Tuesday, April 28, 2020, for friends to view by going to his memorial page on the funeral home website. Friends may mail sympathy cards to the funeral home or leave condolences online to be given to his family.