To share your memory on the wall of Eleanor Diersing, sign in using one of the following options:

Eleanor was born on October 3, 1923, in Shreveport, Louisiana, to Glen L. Williams and Margaret (Ivey) Williams.

She was married on December 14, 1952 to William F. Diersing, who preceded her in death in 2015, after celebrating over 60 years of marriage.

Eleanor graduated from Greenwood High School in Bossier Parish, LA, where she received numerous academic awards. She was also very active in the 4-H organization, winning a number of awards at the Louisiana State Fair.

She received her Registered Nursing Degree from what is now the Louisiana State University Medical Center. She worked at a number of hospitals in Shreveport and New Orleans, with increasing responsibilities. She later took a position as a nurse with the American Red Cross in Shreveport, which is how she met her husband, Bill, when he was stationed at Barksdale Air Field in Shreveport.

After their marriage, Eleanor moved with Bill to Louisville, KY, then to Lexington, KY, where she worked as a pediatric/OBGYN nurse for the University of Kentucky Medical Center. They later moved to Missouri when Bill accepted a position with the Missouri State Highway Department, first in Sikeston, then in Jefferson City. While living in Jefferson City, Eleanor worked as a nurse for the Missouri State Hospital in Fulton, she later took another nursing position with the American Red Cross, where she worked until her retirement.
Eleanor was an avid gardener, which is something she shared a strong connection with Bill. The two had several large gardens on their property, and ran a small Christmas tree farm for approximately 10 years as a small business/hobby.

Eleanor was very active in her church, the Central United Church of Christ, and made many life-long friendships there. She was also very involved in her children’s activities, as a supporter, car-pool driver, and chaperon on group trips, and she placed a strong emphasis on academic achievement.

Throughout her life, Eleanor was a strong supporter of charities and philanthropic organizations. Having worked during the polio epidemic, she was particularly focused on charities focusing on children’s health issues, such as the March of Dimes. She was also a member of the Order of the Eastern Star.

Because of pandemic concerns, all attendees are asked to have a face cover (though these will be provided at the service) and to practice appropriate social distancing practices. A webcast of the funeral service will begin at 11:30 Monday for friends that are not able to attend by going to her memorial page on Freeman Mortuary’s website.

In lieu of flowers, memorials in her name are suggested to the American Red Cross or to the William Diersing Scholarship Fund with Unlimited Potential (formerly Neighborhood Houses) http://www.upstl.org/donate/ Her family would also like to thank Jefferson City Manor Care Center and Hospice Compassus for their wonderful care.

To send flowers to the family or plant a tree in memory of Eleanor Diersing, please visit our Heartfelt Sympathies Store.

Receive notifications about information and event scheduling for Eleanor

There are no events scheduled. You can still show your support by sending flowers directly to the family, or planting a memorial tree in memory of Eleanor Diersing.
Visit the Heartfelt Sympathies Store

We encourage you to share your most beloved memories of Eleanor here, so that the family and other loved ones can always see it. You can upload cherished photographs, or share your favorite stories, and can even comment on those shared by others.

Darcy Humphrey sent flowers to the family of Eleanor Diersing.
Show you care by sending flowers

Posted Aug 09, 2020 at 03:28pm
I was always happy to see Mrs. Diersing at the blood drives. She was so pleasant and kind, plus a great phlebotomist, one stick with little discomfort. She is being remembered so many years later.....
Comment Share
Share via:
CM

Posted Jul 08, 2020 at 11:57am
I was blessed to know Eleanor. When I began attending Central Church in the mid-80’s, Eleanor took care of my 2 young children in the church nursery. She welcomed us with open arms. Eleanor reminded me of the grandmother I had lost many years before and my “can do” mother. She was filled with kindness & strength…devoted to God, her family and doing good for others.
Eleanor the small but mighty earth angel will be missed by many. Jere, may you be comforted by knowing she’s found her place in heaven.
Comment Share
Share via:
JH

Posted Jul 07, 2020 at 01:01pm
Jere, My wife and I began a family tradition of cutting Christmas trees at your parents farm. Even after they stopped pruning and the trees were huge, we kept coming. A big draw was spending time with them and hearing about their lives. They began inviting the 4 of us in for hot chocolate and cookies and refused to take any payment for the trees. Their price was so low anyway it hardly covered the cost of the snacks we had. A few times we got away with leaving a check at the door as we walked out. For years about the only Christmas card we sent was to them. It was always a joy to see your parents, and we missed going after the trees were too big to get into our house. I hope you and your family find comfort in the memories. Jeff Holzem
Comment Share
Share via:

Posted Jul 06, 2020 at 12:28pm
Jere,
Your mother was a true steel magnolia – beautiful, gracious and with a river of determination. Look at all she accomplished – including raising two wonderful men. I will miss visiting her and hearing her great joy about the farm and her flowers, and how proud she always was of you.
One of my favorite memories was your father sweeping the snow off the pond and building a bonfire so we could skate on a frigid Missouri day. Then we all tumbled into your house where your mother had hot cocoa waiting. She was always watching out and taking care of all of us.
I will miss her care and kindness. Neil and I send our love to you. May God send his grace to you.
Love,
Gwen Holt Vasant

Posted Jul 06, 2020 at 12:01am
Even in later years, she was Tres. of our Prime Time Club at Church, knew her figures right down to the penny! walt rottmann
Comment Share
Share via: 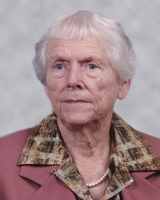