Obituary for Elizabeth "Betty" A. Wade 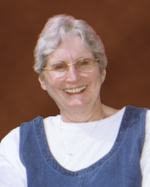 Betty was born on October 16, 1939 in Booneville, Mo. a daughter of Frank F. and Marie Anna Elizabeth (Haldiman) Bieri. She was married on October 13, 1962 in California, Mo. to Quentin V. Wade.

She enjoyed volunteering at polling stations in Callaway County during elections. She was an avid reader, loved cooking for her family, keeping up with her sisters, nieces and nephews and cherished traveling with her husband across the United States.

Funeral services will be conducted at 3:30 p.m. Saturday, April 6, 2019 in the Freeman Chapel with Celebrant Gara Loskill officiating. Graveside services and interment will be held at the Elston Cemetery in Elston, Mo.