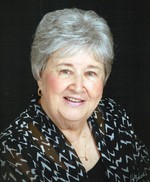 A lifelong resident of the central Missouri area, Erma graduated from Jefferson City High School in 1954. After graduation she worked as a clerk and typist for the Missouri Department of Revenue until the birth of her three children.

Erma was a homemaker the majority of her life and cherished time with her family as a loving wife and mother. Their family lived in Linn, Mo. for over 30 years while Erma supported DeWayne as he worked as a teacher with Linn Public Schools and as the president of Linn State Technical College. They moved to Jefferson City after he retired and had great friends in both communities.

Some of her favorite memories with family were fishing with them at the Lake of the Ozarks and dancing with her husband. She square danced with DeWayne for as long as they both were able. Erma made all of her own square-dancing dresses by hand and always had a matching bolo tie for DeWayne. She loved caring for her house pets and dog sitting for her children. Terry’s Doberman Crystal, Vicky’s schnauzer Molly, and Scott’s Cocker Spaniel Tabby were always spoiled when they spent time with grandma. But the most spoiled of all was Tinker, Erma’s own cat who spent most of its life being groomed while sitting on her lap.

A woman of faith, Erma was a member of First Baptist Church in Jefferson City.

Erma was a social person and enjoyed visiting and dancing with friends. She truly looked forward to those dance outings with her friends four nights a week and they would travel all around central Missouri following Hambo Latham. Erma loved to cook something sweet for all her dancing friends.

Erma had a small family and is survived by one son, Scott Rakes of Jefferson City, Mo. and numerous friends.

A memorial service will be conducted at 2:00 p.m. Sunday, August 16, 2020 in the Freeman Chapel with the Reverend Manuel Seaton officiating.

Due to the pandemic, her family understands if anyone is uncomfortable attending the service. A webcast of Erma’s service will begin at 2:00 pm Sunday for friends and extended family that cannot attend by going to the "photos and videos" tab of this page and scrolling down to the webcasting link. Friends may mail sympathy cards to the funeral home or leave condolences online to be given to her family.