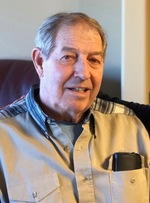 Jerrold attended Sturgeon High School and proudly completed his GED. He later served in the United States Army from 1966-68, attaining the rank of Sgt. E-5 while based in Thailand. Jerrold had a love for life on the road. He became an over-the-road owner/operator and he continued this on and off throughout his life time. Jerrold also was a custom home builder in Missouri and New Mexico.

He is survived by his children: Dena Denae Fuentes (LeRoy) of Savannah, TX, Kena Renae North (Tim) of Roswell, GA and his son, Lance Wilson Wade of Holts Summit, MO. Jerrold is also survived by his sister, Jackie Kemmer Beal (Roy) of Jefferson City, MO, and brother Michael Carlo Wade of Fulton, MO, as well as four grandchildren, numerous nieces and nephews and other family and friends.

Jerrold was preceded in death by his much loved grandmother, Georgia Spene Wade of Sturgeon, MO, his parents and sisters: Judith Ellen Scrivner (Roger) and Nancy Beth Compton, and special riding buddy of the furry kind, “Sandy Girl”.

Private family services will be held at the Missouri Veterans Cemetery in Jacksonville, MO.

In lieu of flowers, expressions of sympathy may be made to the Missouri Heart Association or the Alzheimer’s Association, or a donation of your choice.

Arrangements are under the direction of Freeman Mortuary, 915 Madison Street, Jefferson City, MO.