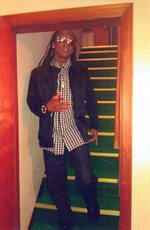 He was born on August 21, 1975 in Dar es Salaam, Tanzania, a son of Monass Wilson Parsalaw and Rodha Monas Parsalow. He married Latisha (Johnson) Mushi in Jefferson City.

Frank moved to the United States when he was 20 years old and lived in Washington D.C. After spending 5 years there, a friend talked him in to moving to Jefferson City.

Frank started his working career in Jefferson City at R.R. Donnelly, where he met the love of his life. Most recently, he has spent the last 4 years working at Unilever as a Line Leader.

Frank was a very smart man, who never turned down a conversation about politics. He stayed up to date on the news, and rarely missed watching an evening news channel. Frank was full of character and always fun to talk to. He enjoyed gambling and playing poker with his friends. They could often be found at the boats in St. Louis.

Frank was a family man and loved his wife and children. Some of his fondest memories include staying home with his wife and dancing the night away. Frank will be remembered for his infectious smile, for always being in a great mood, and also for his encouraging words.

Frank was preceded in death by his grandma, aunt and uncle.

Services for Frank will be held privately by his family.

In lieu of flowers, memorial contributions are suggested to the Frank Mushi Memorial Fund.