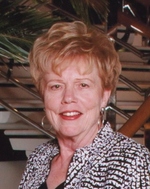 Georganna Myers Beachboard, age 81, of Jefferson City, Mo., went to be with her Lord Wednesday, May 15, 2019 at Capital Region Medical Center surrounded by her loving family.

After an experience abroad and in Washington D.C., Georganna was a lifelong resident of Central Missouri. Georganna graduated from Bowling Green High School in 1955. The Class of 1955 taught her many things, one of which was the class motto, “life is not a destination, but a journey.” She went on to earn both a Bachelor of Science and a Master’s degree in Education from the University of Missouri – Columbia.

Georganna worked as an administrative assistant for the United States Senator, Edward Long, in both the Missouri and Washington D.C. offices. She moved to central Missouri where she became a business education teacher for the Southern Boone School District in Ashland, Mo. for several years. During this time she authored the Missouri Title IX legislation, which prevents discrimination in education. From that experience, Georganna began her career with the State of Missouri – Department of Education for sixteen years and worked as the Director of Special Education Services. While there, her primary goal was to promote women in vocational education programs. These pioneering efforts led to her being recognized in many ways. The late Governor Carnahan presented her with the “Martin Luther King Diversity Award,” First Lady, Melanie Blunt, recognized her with the “Award of Achievement in Education,” and Governor Nixon presented her with the “Distinguished Service Award for Education by Missouri Council on Economic Development for Women.”

Georganna was a member of First Christian Church and had previously been a member at Community Christian Church. Her faith was an integral part of her life and she was proud to be active with the Christian Women’s Fellowship, Church Women United, and served as Elder and Deacon at both churches. She also enjoyed leading seniors in the “Learning in Retirement” program. She was a board member of the Community Concert Association and volunteered at Capital Region Medical Center.

Georganna spent many summers at the Lake of the Ozarks and enjoyed fishing. Her passions also included: golfing, being an avid bridge player, and a Master Gardener who enjoyed working with plants and flowers. Georganna cherished time with her husband, especially cruises to the Mediterranean, Vienna, Italy, Croatia, the Greek Isles, Isle of Capri, Athens, Rome, Alaska, the British Isles, Normandy and the Holy Land.

Georganna was preceded in death by her parents, William and Gladys Myers.

Funeral services will be conducted at 10:00 a.m. Monday, May 20, 2019 at First Christian Church in Jefferson City, Mo. with the Reverend Beau Underwood officiating. Graveside services and interment will be held at 2:00 p.m. Monday at Memorial Garden Cemetery in Bowling Green.