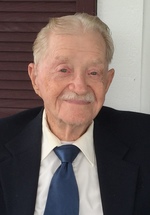 He served his country in the United States Army Air Corps during World War II. He was stationed in Alaska to help build the Alaska Highway or commonly referred to as “Alcan”. He was proud to participate in the Central Missouri Honor Flight and talked about that experience frequently.

George was employed in the construction trade for many years and was proud to help build the Crown Center in Kansas City, Mo. He later worked in the maintenance department with Tan-Tar-A Resort for several years and at Lake Ozark Regional Hospital until his retirement.

He possessed a strong faith and was a member of the Fairgrounds Road Church of Christ in Jefferson City. When he lived at the Lake of the Ozarks, George volunteered his time to help build the Church of Christ Church in Camdenton, Mo. He loved music and singing so he enjoyed being a song leader during services.

He cherished time with his family, especially cooking hotcakes for them. He grew up during the great depression so he would improvise many things in his life to be thrifty and just called it the “Nuttle Way” of doing things.

Funeral services will be conducted at 11:30 a.m. Friday, December 14, 2018 at Fairgrounds Road Church of Christ with Carey Terry officiating. Graveside services and interment with military honors will be held at 3:00 p.m. Friday at the Glover Chapel Church of Christ Cemetery in Richland, Mo.

In lieu of flowers, memorial contributions are suggested to the Glover Chapel Church of Christ Cemetery in Richland, Mo.