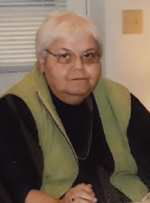 A lifelong resident of Jefferson City, Mo., Glenda graduated from Jefferson City High School in 1960. She was employed by both the Tweedie Shoe Factory and the International Shoe Factory for a combined 10 years. Glenda went on to work for the Department of Revenue for 30 years until her retirement.

Glenda enjoyed playing bingo, card games and trying her luck at scratch off tickets or pull tabs. She was one of Elvis’ biggest fans and always enjoyed hearing his music. Glenda had a big heart and loved to have a good time. She was a very supportive aunt and could even be accused of spoiling at times. Her fondest memories were all with her family – spending time together, playing games and telling stories of her family’s history, which they will all cherish.

Glenda was preceded in death by her parents and her brother-in-law, John M. Scott III, her grandparents and several aunts, uncles and cousins.

Funeral services will be conducted at 2:00 p.m. Sunday, January 12, 2020 in the Freeman Chapel with Celebrant Gara Loskill officiating. Interment will be at Hawthorn Memorial Garden.

In lieu of flowers, memorial contributions are suggested to the Dan Neve Cruise 4 a Cause for Cancer Research or the American Cancer Society.