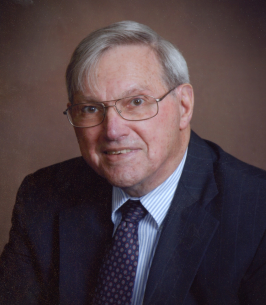 Gordon was born October 17, 1936 near Branson, Missouri to George Fredrick and Ruby Mabel Esther Persinger. He was married in Branson to Virginia (Ginny) Wallace on September 26, 1965 who survives.

Gordon graduated from Branson High School, class of 1954, as Valedictorian of his class. He attended Southwest Missouri State (Missouri State), in Springfield, Missouri for one year. He spent two years contributing to the building of Table Rock Dam. He later pursued his education at University of Missouri Columbia, graduating in 1961 with a degree in Industrial Engineering. He was commissioned as 2nd Lieutenant Artillery Commander, and served two years on active duty in the United States Army. He finished his military career as a 1st Lieutenant Battery Commander at Fort Benning, Georgia.

In December 1965, he took a position with the Missouri State Public Service Commission, where he worked for 35 years. He retired as director of the Division of Research and Public Affairs in 2000. He represented the commission as a member of the National Conference of Utility Engineers Regulatory and the National Conference of Utility Regulators. He also provided expert testimony in cases before the Missouri Public Service Commission, and other state and federal agencies. He was nationally known for his expertise. He was a registered Professional Engineer, past president of the Missouri Chapter-Jefferson City, and served on the board as a member of the Missouri Engineering Alumni Association, and other organizations.

He was a long time member of Faith Lutheran Church, where he served as the President of the congregation, elder, choir director and volunteer for 42 years. After retirement he went on six summer work camps with the youth group from church, to various areas of the United States, helping with home projects for the needy. He also volunteered with Habitat Builds and was an active member of the Jefferson City Cantorum for 46 years where he shared his love of music.

He was preceded in death by his parents, Fred and Ruby; brother, Willard J.; and sister-in-law, Patty Ann.

Visitation will be at Faith Lutheran Church from 9:00 until 11:00 a.m. Thursday, June 2, 2022. Funeral services will follow at 11:00 a.m. with Reverend Eric Gledhill officiating. Graveside services with military honors will be at Riverview Cemetery.

In lieu of flowers, memorials are suggested to Faith Lutheran Church.