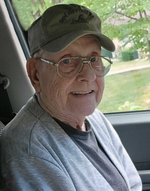 A lifelong resident of Jefferson City, Whitey was a graduate of Jefferson City High School. In July, 1955, he enlisted in the United States Navy where he served as a Avia Machinists Mate, Turbo Engine Jet Mechanic, until his honorable discharge in May, 1959. Whitey had many stories that he loved to share proudly about his service in the Navy.

Of all the things he did in his life, his proudest moments were the ones spent with his family. As the father of three daughters, his patience was definitely proven. He was always there, no matter what the circumstances. He'd come to the rescue whenever needed, servicing broken down cars, shorted out vacuum cleaners, failing appliances; you name it, he could fix it. He truly knew how to make his family feel like they were the richest in the world. Along with his nickname of Whitey, many have probably heard him referred to as Monkey, a nickname proudly given to him by his grandchildren.

Whitey enjoyed bowling and spent many years bowling with his team of friends sponsored by B&W Battery and Auto Repair. If you'd ever see him out and about, you'd notice he never went anywhere without his green B&W ball cap. He treasured his time spent with the team and bowling nights truly put a smile on his face and a spring in his step. He also enjoyed golfing, playing the lottery, and trips to the casino.

He was preceded in death by his parents and step-father, Elra Hayden.

Visitation will be from 11:00 a.m. until 12:30 p.m. Tuesday, February 1, 2022, at Freeman Mortuary. The general public is welcome to attend the visitation following social distancing guidelines.

A private funeral service will be held in the Freeman Chapel with Reverend Melissa Hatfield officiating. A private graveside service with military honors will follow at Riverview Cemetery.

A webcast of the funeral service will begin at 1:00 p.m. Tuesday for friends and family not able to attend by going to his memorial page on Freeman Mortuary's website.

In lieu of flowers, memorial contributions may be made to the Gurucharri Foundation, https://protect-us.mimecast.com/s/N3C2CzpAG6CkrPRh47BsC?domain=docg.org