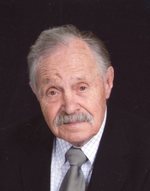 Jack Eugene Larson, age 89, of Jefferson City, MO, passed away Wednesday, January 9, 2019, at St Joseph’s Bluff in Jefferson City with his loving wife Emma by his side.

Jack was born on September 22, 1929 in Goodland, KS., son of the late Lawrence and Vida Marie (Roby) Larson. He graduated from Mt. Vernon High School in Mt. Vernon, MO. then earned his Bachelor of Science degree in Education from Southwest Missouri State University. While at SMSU, he was on the football and boxing teams. He married Emma Wilmoth on September 13, 1952 in Eureka Springs, AR. He proudly served our country in the United States Army during the Korean War. Jack later received his Master of Education from Milligan University.

Jack coached high school football in Ava, MO and El Dorado Springs, MO and was a high school counselor in Sullivan, MO. He retired from the Missouri State Department of Elementary & Secondary Education, Vocational Rehabilitation. After retirement, Jack worked at the Missouri State Capitol as a tour guide where he enjoyed sharing his passion for history and meeting people from across the world. Jack also enjoyed fishing and hunting and was an avid golfer.

Jack was a resident of Jefferson City, MO since 1964. He was a faithful member of First Baptist Church where he led the Irwin Sunday School class for many years.

Visitation will be held on Friday, January 18, 2019 at First Baptist Church, Jefferson City, from 10:30 am to 12:00 pm with services immediately following at 12:00 pm with the Reverend Dr. Doyle Sager officiating. A graveside service and interment with military honors will follow at Riverview Cemetery.