To share your memory on the wall of James Benton, sign in using one of the following options:

Provide comfort for the family of James Benton with a meaningful gesture of sympathy.

Print
James Dennis “Jim” Benton, age 80 years, of Jefferson City, Mo. passed away on Tuesday, May 14, 2019 at home surrounded by his loving family.

He was born on January 22, 1939 in Jefferson City, Mo., the son of Isom and Viola (Tellman) Benton. He was united in marriage on September 21, 1974 in Wardsville, Mo. to Bernice Derkum, who survives at the home.

A lifelong resident of the central Missouri area, Jim was a 1956 graduate of St. Peters High School in Jefferson City, Mo. He then went on to study at United Electronics Laboratories in Louisville, Ky.

Jim proudly served two years in the United States Army during the Vietnam era. He received his honorable discharge in 1963 as a Private First Class.

He was employed by NCR Corporation in the Field Engineering Division from 1964 to 2001. After retiring, Jim did part-time contracting work for the Item Processing Department at Central Technology Services until 2010.

Jim was a faithful member of St. Stanislaus Church in Wardsville Mo., where he and his wife have been members for over thirty years. Jim’s love for his country made him a dedicated member of the VFW, Post 1003, American Legion, Roscoe Enloe Post 5 and AMVETS.

Jim loved the outdoors and spent a lot of time meditating with Mother Nature and her maker. He took pride in working with his hands in the garden or creating several special woodworking pieces, including an airplane swing, a rocking horse and a train car every year for Christmas. He enjoyed folk music and even played the guitar and sang. He also had a deep interest in studying American folk history. Jim’s favorite place to be was home where it was quiet and peaceful. He will be remembered for being an easy going, laid back, quick-witted gentleman that could get along with anyone. He cherished his family and always made sure to put them first. Jim instilled in his children strong values that have served them well. He fostered many lifelong friendships, for which he was grateful. To Jim, there was no greater gift than the love of friends and family.

He was preceded in death by his parents; two sisters, Margaret Jobe and Mary Ann Andrews; and four brothers, Harold, Delbert, Howard, and Thomas Benton.

A Mass of Christian Burial will be conducted at 10:00 am Friday, May 17, 2019 at St. Stanislaus Church in Wardsville Mo. with the Reverend Medina officiating. Graveside service and interment with military honors will follow at the Mausoleum of the St. Stanislaus Cemetery.

In lieu of flowers, memorial contributions are suggested to St. Stanislaus Church and Goldschmidt Cancer Center.

To send flowers to the family or plant a tree in memory of James Dennis "Jim" Benton, please visit our Heartfelt Sympathies Store.

The Milius Family sent flowers to the family of James Dennis "Jim" Benton.
Show you care by sending flowers

Posted May 18, 2019 at 03:50pm
I remember Uncle Jim always coming over to Mom & Dad's to chat and he always brought his Stag beer even though Dad would have beer just for him. His laughter was contagious and I loved it. My favorite memory is him singing at my wedding. I cried when he sang Time in a Bottle for me and Brian. For our 1st anniversary, Uncle Jim and Aunt Bernice gave me a music box with that song. It has been 30 years and I still open it to hear the song. He will be missed. I am sure that Dad (Tom Benton) and Uncle Doc with Aunt Ellen were there to greet him when he arrived at the pearly gates. Heaven won't be the same with those 4. Thoughts and Prayers to Aunt Bernice, Kendall, Travis and family. A great man has been lost but he left alot of memories.
Jeanne (Benton) Deetman.
Comment Share
Share via:
RJ

Posted May 16, 2019 at 08:44pm
I remember as a young kid hanging out with Uncle Jim in his upstairs bedroom at Grandma Benton's house, watching him tinker with electronic gadgets and then taking a break to play his guitar. He used to sing So, git outa de way for old Dan Tucker,
He's come too late to git his supper. Supper's over and breakfast cookin', Old Dan Tucker standin' lookin'.

So Uncle Jim, now you are gone
You have crossed the edge of the heavenly beyond
To a better place of peace and tranquility
Where you'll be surrounded by bliss and serenity

Our heartfelt sympathy to Bernice, Kendall and Travis.

Posted May 16, 2019 at 08:00pm
Bernice, Kendall, Travis and family,
Know that you are in our prayers as you'll miss Jim Dad much. We'll always remember him as the soft-spoken gentleman he was, and raised his sons to be.

The Milius Family purchased flowers for the family of James Benton. Send Flowers

Posted May 15, 2019 at 04:35pm
Our heartfelt condolences to the family and friends of Jim. We will surely miss the presence of a truly loveable and kind person. We know this must be a very difficult and demanding time for you all. We are keeping you in our thoughts and prayers.
Comment Share
Share via: 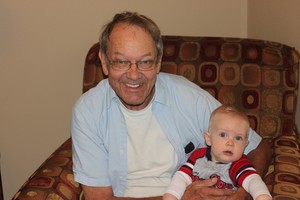 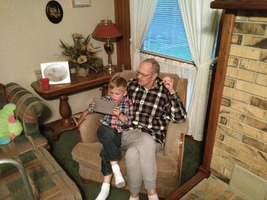 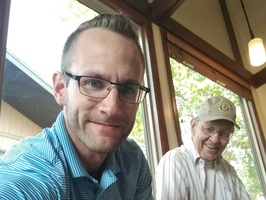