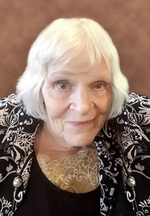 She was a mother of six children. Born in Peoria, April 2, 1934, she was the daughter of Russell M. Planck and Esther (Russenburger) Planck and grew up in Washington, IL.

She graduated from Washington Community High School Class of 1952. She attended Eureka College. She married Robert Y. Haller, WW2 Veteran Pilot, from Peoria, IL and they had five children.

She was active with Cornstalk and Peoria Players Theatres. She directed Fiddler on a Roof in 1969. She worked for Foster & Gallagher and Ruppman Advertising in the 1970’s.

She was predeceased by her sons, Patrick Haller and Shane Haller; her daughter, Kasey (Haller) Buhl, and her parents, Russell and Esther Planck.

Her ashes will be buried in Glendale Cemetery in Washington, IL next April. Planck descendant’s graves at Glendale go back to 1817.