To share your memory on the wall of Janet Williams, sign in using one of the following options:

She was born on June 3, 1939 in Avon, Ill., the daughter of James and Phyllis (Emory) Evan... Read More
Janet Lee Williams, age 81 years, of Jefferson City, Mo., passed away Sunday, May 2, 2021 at River City Living Community surrounded by her family.

Janet was a 1957 graduate of B-PC High School in Bushnell, Ill. After graduation, she took college level courses at the University of Illinois for three years.

Janet began her banking career at Central Bank West as a teller, where she worked for 8 years. In July of 2004, Janet retired from her 14-year career at Exchange National Bank, now known as Hawthorn Bank. There, she worked as a teller and accounting assistant.

Janet was a partner of the Elite Advantage Club, and a volunteer at Capital Region Medical Center. Janet was also a part of SWANS – “Spunky Women Adjusting Nicely,” a local support group for widows.

Janet kept her mind sharp by reading books, completing puzzle books, and traveling to some of her favorite destinations. She loved music, and enjoyed playing the piano. She loved attending local plays and musicals with her friends. Janet made friends everywhere she went and loved meeting new people. She cherished time she spent with “the girls,” especially all of their outings and lunches. Those who loved her will miss her pragmatic approach to life’s obstacles, her outspoken but respectful nature, and her glass half full attitude.

Visitation will be held on Saturday, May 8, 2021 at Freeman Mortuary from 10:00 a.m. until 11:00 a.m. The general public is welcome to attend the visitation while following social distancing guidelines.

A webcast of the funeral service will begin on Saturday at 10:45 a.m. for family and friends to view by going to the “photos and videos” tab on this page and scrolling down to the webcasting link. Friends may mail sympathy cards to the funeral home to be given to her family.

To send flowers to the family or plant a tree in memory of Janet Lee Williams (Evans), please visit our Heartfelt Sympathies Store.

Receive notifications about information and event scheduling for Janet

We encourage you to share your most beloved memories of Janet here, so that the family and other loved ones can always see it. You can upload cherished photographs, or share your favorite stories, and can even comment on those shared by others.

Merlin and Michael Evans sent flowers to the family of Janet Lee Williams (Evans).
Show you care by sending flowers

Posted May 06, 2021 at 09:10pm
Aunt Janet was an awesome lady - great sense of humor and always a joy to talk to. Thoughts and prayers to the whole family.

Posted May 04, 2021 at 07:57pm
Thinking of all of you. I miss the times her and Aunt Anne would come to Bushnell and visit and we would meet at the Jeny Wren. She will be missed. 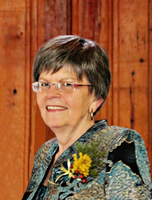