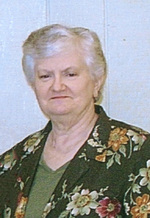 She was born on August 22, 1938 in New Madrid County, Mo. the daughter of Valentine Richard and Mildred Lurene (Holder) Frala.

Jean grew up near Sikeston, Mo. and graduated from Gray Ridge High School.

She was employed as a bookkeeper for several loan companies in Sikeston before moving to the Jefferson City area to be closer to her family. She worked closely with her brother’s accounting firm, Ronald L. Frala, CPA, as a bookkeeper for many years. Most importantly, Jean was an extremely caring person and took great pride in being the caregiver to both her parents when their health began to suffer.

A woman of deep faith, Jean was a member of First Assembly of God. In her free time, she enjoyed cross stitching and had a passion for music. In her younger years, she even traveled sharing her beautiful singing voice with others.

She was preceded in death by her parents; one brother, John Richard Frala; and one sister-in-law, Debbie Frala.

Private graveside services and interment will be held at Hawthorn Memorial Gardens with her brother, the Reverend Dr. Terry Frala officiating.