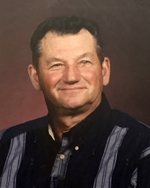 A lifelong resident of the central Missouri area, Jim attended the Osage Bend School. He then began working on the farm full time with his father, a tradition he would pass down to his own children. Jim’s two children recall memories of baling hay and other various farm chores. He ran a dairy cattle and row crop operation for over 50 years, until he started raising beef cattle. Jim’s commitment to his farm was noteworthy. He was proud to have been able to continue doing farm work until about two months prior to his passing. Jim enjoyed cultivating the land and truly appreciated the subtle beauty in working and raising cattle. He liked to watch the calves run and play and soak in the simple pleasures of farm life.

Jim was an outdoorsman. He liked to go hunting and fishing and held many fond memories of catching catfish out of the pond with his kids. Jim always used his skills to better the lives of his family. When his children were young, Jim used his trapping skills to procure raccoon and fox pelts to sell in order to make some extra money for Christmas gifts. Jim was an expert marksman and, in addition to hunting, he loved to go skeet shooting. He was known throughout the family for being the man that never missed a shot. Jim was a head strong man who was set in his ways, but he was also a dedicated provider and knew how to slow down and enjoy the little things in life. He was known to tell a few stories and reveled in reminiscing and sharing those memories with his family. Jim worked hard all his life and was more than satisfied by all he built in his lifetime.

He was a man of faith and was a member of St. Margaret Catholic Church in Osage Bend, Mo. He was also a member of the National Farmers’ Association and the Dairy Farmers of America.

He was preceded in death by his parents; his loving wife of 37 years, Mary Ann; one sister, Betty Jo Mertens; an infant sister, Shirley Siebeneck; one sister-in-law, Barbara Horstdaniel; and two brothers-in-law, Roman Hagenhoff (wife, Alberta) and Herman Hagenhoff.