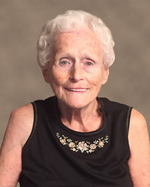 She was married on April 14, 1951 in Jefferson City, Mo. to Edward H. Kempker, Sr. From this marriage her four children were born.

After she married, she and her husband built the Big K Lake in Moberly, Mo. This was a stocked lake in which people were allowed to fish for a fee. During this time they also owned and operated a tavern called “Past Time” in downtown Moberly. She also worked for a total of over 20 years at McGraw Edison as a press room operator in both Moberly and Jefferson City. Joan went on to work for Bartlett-Collins Glass Company in Sapulpa, Oklahoma to be closer to her daughter, Goldie, until she moved back to Jefferson City almost 20 years ago. In her later years, she worked at the Break Time in Taos where she enjoyed greeting customers until her final retirement in 2014. Joan’s family will remember her hard work ethic, which she instilled in all of them, and the ability to give it her best every day.

When Joan wasn’t working, she could be found with a crochet hook or working on a cross stitch project. She also cherished time playing cards with her family – pitch, canasta and pinochle were among her favorites. Joan enjoyed looking out over the beautiful scenery at her home on the Osage River, trying to find a good deal at yard sales, celebrating Christmas with family, and going to the casinos with her friends.

Joan was preceded in death by her parents; a son, Larrie Chester Kempker; a daughter, Goldie Muse; and her sisters, Goldie Lawson and Nadine Surface.

A Mass of Christian Burial will be conducted at 11:00 a.m. Wednesday at St. Peter Catholic Church with the Reverend Jeremy Secrist officiating. Graveside service and interment will be held at 1:30 p.m. Wednesday at St. Mary’s Cemetery in Moberly, Mo.