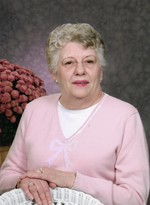 A lifelong resident of the central Missouri area, Joan and Elba were the proud owners of The Ponderosa BBQ in Cedar City where they were known for their award-winning ribs. She was a licensed realtor for 17 years and spent many years as a waitress at Viet’s Restaurant.

She was a member of the Jefferson City Police Wives Auxiliary.

Joan enjoyed traveling all over the country with her husband and their Shih tzu’s in their Bounder RV, specifically the Eastern and Southern States. They loved to winter in Texas and Florida with the Duncan’s and the Patton’s. Joan spent her spare time reading, crocheting, painting and visiting the casino or playing games on the computer.

She was preceded in death by her parents; her husband; son, Leslie B. Roark; grandson Eric W. Roark; two sisters, Velma Long and Pauline Rea; and one infant sister, Maybelle Hogg.

Graveside services and interment will be conducted at 11:30 a.m. Saturday, September 12, 2020 at Hickory Hill Cemetery in Hickory Hill, Mo.

In lieu of flowers, memorial contributions are suggested MoCops (Missouri Concerns of Police Survivors) or The American Police Hall of Fame.