To share your memory on the wall of John Fisher, sign in using one of the following options:

Provide comfort for the family of John Fisher with a meaningful gesture of sympathy.

He was born on April 20, 1967 in Independence, Mo. The oldest son of Gary and Helen (Wedge) Fisher, he was married on June 18, 1994 at Mt. Pleasant Baptist Church in Hartsburg, to Kerry Ann Imsland.

A lifelong resident of the Central Missouri area, John graduated from Hickman High School and continued on to college at State Fair Community College in Sedalia, Mo. John and his family are the proud owners of Lee’s Famous Recipe Chicken in Jefferson City, Columbia, and Rolla. He worked alongside many wonderful people – both employees and customers. Many who knew John could see how dedicated he was to his work.

In John’s spare time he could be found on the golf course or at the family farm shooting guns and riding ATV’s. His favorite memories include his childhood in Columbia, vacations, quality family time, and most of all he loved spending time with his daughters and wife.

John was a loving husband, father, son, brother and friend. He could always find someone to talk to; even if you were a stranger he treated you like he knew you forever. He was amazing about that! John was strong willed but softhearted. He loved his family dearly. He was loyal and always provided for their every need. John had a tender heart and always tried to help those in need. He was a friend to many and was loved by all.

Due to the COVID-19 pandemic, a private family service will be held in the Freeman Chapel with the Reverend Mike Quinn officiating. Graveside services will follow at Hart Hill Cemetery. A webcast of the service will begin at 10:00 am Monday, April 6, 2020 for friends to view by going to his memorial page on Freeman Mortuary’s website. A celebration of life will be announced when restrictions for gatherings have been lifted.

Memorials are suggested to Gideon’s International.

To send flowers to the family or plant a tree in memory of John Fisher, please visit our Heartfelt Sympathies Store.

Daniel & Heather Laux, Sarah Hill, and others have sent flowers to the family of John Fisher.
Show you care by sending flowers

Posted Apr 07, 2020 at 08:56am
John brought so much joy to all around him and was one of the best bosses that I've had the honor to work with! Thinking of you with sympathy — and here for you with loving support.
John 14:27
Peace I leave with you; my peace I give to you. Not as the world gives do I give to you. Let not your hearts be troubled, neither let them be afraid.
Comment Share
Share via:
DR

Posted Apr 06, 2020 at 02:37pm
Our deepest sympathy to Helen, Kerry, their daughters, Jim, Jason and the entire family. Although we didn’t know John, after watching the beautiful and touching service for him, it makes us wish we had known this special person. I have known Helen for many years through WOW. A Dear woman of faith and always helping others. It is wonderful how she taught her boys and grandchildren to have a personal relationship with our Lord and Savior. May God comfort your family in the days to come. You are in our thoughts and prayers. Dawn & Mike Rolufs
Comment Share
Share via:
JO

Posted Apr 06, 2020 at 10:21am
John was a true inspiration, mentor, friend, and brother in Christ! We look forward to reuniting with him with along side our Lord and Savior!

Posted Apr 06, 2020 at 09:54am
Fisher family; So many amazing memories of growing up across the street on Cowan Dr. I remember the first time I saw John while the moving trucks were still there. While I was deeply saddened to hear of John's passing, I give thanks for the expressions of faith and hope that were John's strength and confidence. This week is a reminder our hope is in Christ Jesus and there is an eternal reunion that awaits. John is just a few steps ahead of us. May God's grace and mercy comfort your hearts in this time. Kerry, prayers for you and the girls. Helen, Jim and Jason, it has been many years but you all remain close in my heart. God bless you.
Comment Share
Share via: 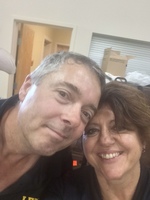 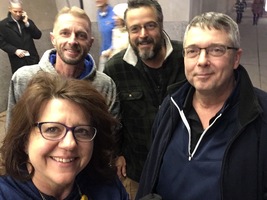 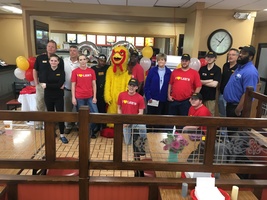