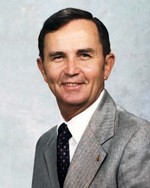 Mr. John Lowell Griffith, 95, of Jefferson City, MO, passed away peacefully Saturday, July 11, 2020 at Heisinger Bluffs. John was born on November 3, 1924 in Jefferson City, the son of Harry Earl and Mary Belle Jones Griffith. He was married on August 15, 1948 in Jefferson City to Margaret Eleanor English.

John grew up in Jefferson City and graduated Jefferson City High School in 1942. He attended Southeast Missouri State University for a semester before he turned 18 and could enlist in the U.S. Navy. After the war, he followed his former SEMO football coach to Iowa State University where he quarterbacked the football team and received a Bachelor of Science degree. Later he earned an M.S. from Washington University.

John served in the U.S. Navy as a Seaman, 1st Class, in the Pacific theater during World War II. After the service, he met and married Margaret, started a family and began his 30-year teaching career in St. Joseph, Missouri. He returned to his home in Jefferson City as teacher and head coach of the football and track teams from 1950-1958. John was immensely proud of every player on his teams and over the years told and re-told innumerable stories of those early years, the teams’ winning traditions including the 1957-58, 9-0 record, the beginning of Jefferson City’s many years of undefeated seasons. He was also proud of the Jays Booster Club, built during that time by an active and appreciative community.

In 1958, he moved his family to Clayton, MO, where he continued to enjoy a successful teaching and coaching career. Again, he enjoyed enthusiastic community support and great athletes. John and Margaret were also active members of Webster Groves Christian Church where he was a Deacon. He retired from teaching in 1980.

That was the beginning of the rest of an active life which he began by literally building a house on the Indian Creek branch of Lake of the Ozarks. He loved fishing, boating, golfing, and teaching aerobics in Versailles and Eldon which he did for many years. John and Margaret also belonged to many social groups, including a dance club. He was Chief of the Volunteer Fire Department in Golden Beach and along with Margaret helped found Golden Beach Community Church. During the years at the Lake he especially enjoyed time outdoors with friends and grandchildren, hiking, three-wheeling, fishing, tubing, water skiing, and “instructing them” about life and athletics.

In 2004, they moved back to Jefferson City and re-established many ties. They rejoined the First Christian Church and the choir and became active supporters of the Performing Arts Center. John was a member of Capital Region’s Wellness Advisory Board and continued his “activity habit” as a member of The Healthplex. He was also a member of American Legion Post 5 and loved fried chicken dinners there with friends almost every Friday evening.

John will be remembered for his friendliness and always being able to strike up a conversation. It is said that he never walked into a room where he did not already have a friend or leave with a new one.

He was preceded in death by his parents, wife, brother, Boyd Griffith, and his sister, Mary Lou Gardiner.

An online memorial service will be held on July 25, 2020 with the Reverend Beau Underwood officiating. Private graveside services with full military honors will be held at Hawthorn Memorial Gardens.

Because the extra precaution with COVID-19 will prevent in-person gathering, friends are invited to the online memorial service at 11:00 a.m. Saturday, July 25, via a free Zoom room. Visit the Zoom website or download the free app to your computer or mobile device. The meeting room can be accessed that morning at https://zoom.us/j/81831315653 or by choosing to “join a meeting” then using the ID 81831315653. You will need to join the “live video” and “internet audio.” This online service will include time for friends to share memories, stories and tributes about John with his family and one another.