To share your memory on the wall of John Ostrander, sign in using one of the following options:

Provide comfort for the family of John Ostrander with a meaningful gesture of sympathy.

John was a 1945 graduate of Diagonal Public High School. He continued his education at Drake University earning a Bachelor’s Degree in Music Education in 1949. He was member of the Drake concert and marching bands and the Drake Des Moines Symphony. John shared his love for music by teaching music in public schools in Newton, Ia., from 1949 until 1952.

In 1952 John was drafted into the United States Army, taking basic training with the 101 Airborne Division. He was accepted to the Signal Corps OCS program at Fort Monmouth and was commissioned as a 2nd Lieutenant in January 1953.

After serving his country, John went back to school on the GI bill, earning a Bachelor’s Degree in Civil Engineering from the University of Arkansas in 1959. He was then employed by the Missouri Highway Department for 33 years. There he worked on the traffic signals and lighting, Communications, he was also a Registered Professional Engineer Land Surveyor. He retired in February of 1994.

John and Barbara moved to Jefferson City in 1960 and became members of the First Presbyterian Church. He also joined the Jefferson City Community Orchestra. John enjoyed the outdoors, and he never missed an opportunity to go hunting or target shooting. He also loved to travel, especially to Italy. John spent much of his life as a Mason; he worked his way up to a 32nd Degree Mason.

A Celebration of Life Service will be held at 2:00 p.m. with the Reverend Barry Williams officiating. Graveside services will follow at Riverview Cemetery.

Posted Jul 04, 2019 at 09:31am
Uncle John, you were a great guy and I enjoyed the times we visited. May you rest in peace
Comment Share
Share via: 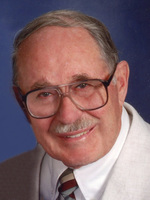