To share your memory on the wall of Jose Cornejo, sign in using one of the following options:

Jose was born on December 11, 1951 in El Salvador, the son of Jose L. and Erlinda (Jovel) Cornejo. He was married on June 4, 1977 in El Salvador to Dina Cornejo who survives at the home.

Jose was born and raised in El Salvador and became passionate about sports at an early age. He loved playing soccer and basketball with his friends and those efforts eventually led to him playing for the professional soccer team in El Salvador. After several years of playing, he later became a manager with the professional team and was a member of the Real Madrid Soccer Club. He will always be “Chepito/Chepepa” to those that played with him and he cherished the relationships he had with his teammates and players.

He and Dina made the move to Southern California to continue his education and attended college at the University of San Francisco in 1975. They lived in California for over 25 years where he delivered lumber to businesses and individuals. Many of those individuals were celebrities, which led to some amazing conversations and stories, so Jose often told people he “delivered lumber to the stars”. In 2013, Jose moved to Jefferson City, Mo., to be closer to his children.

When Jose moved to Missouri, he started work at the Missouri State Capitol and has recently been working at Dix Road Cleaners. He enjoyed living in Jefferson City because he was closer to his grandchildren and found it to be a place filled with love and hospitality.

Jose made it a point to always leave a smile on other’s faces, especially if you were on the receiving end of one of his bear hugs. His love of soccer and music made for some great memories with family. Many weekends were spent cheering on their favorite soccer teams and planning the next classic rock concert they could attend together. He coached both of his children as they grew up playing soccer and basketball. The past few years his greatest joy has been being “Tito” to his grandkids. Together, they enjoyed eating desserts, surprising each other with gifts, and him instilling in them the values he passed down to his children.

Jose was preceded in death by his parents and one brother, Miguel Cornejo.

A visitation will be held from 3:00 p.m. until 5:00 p.m. Friday, December 11, 2020 at the Columbarium at Riverview Cemetery. A balloon release with entombment of his cremated remains will be held around 4:30 p.m. Friday.

In lieu of flowers, memorial contributions are suggested to the Jose Cornejo Memorial Fund by mailing any donations in his memory to P.O. Box 95, Jefferson City, Mo. 65102.

To send flowers to the family or plant a tree in memory of Jose L. Cornejo, please visit our Heartfelt Sympathies Store.

Receive notifications about information and event scheduling for Jose

We encourage you to share your most beloved memories of Jose here, so that the family and other loved ones can always see it. You can upload cherished photographs, or share your favorite stories, and can even comment on those shared by others.

Sandra Reveles (Sands), Jesse Aguilar, and other have sent flowers to the family of Jose L. Cornejo.
Show you care by sending flowers

Posted Dec 28, 2020 at 03:20pm
So sorry to hear this sad news. Jose always had a smile to greet us with when he made deliveries to me at The Schaefer House. I will miss him and his infectious smile. Hugs to you all at the terribly difficult time.
Comment Share
Share via:
PT

Posted Dec 08, 2020 at 11:49pm
My deepest sympathies for your loss. His brilliant smile and friendly personality will be greatly missed. Prayers for you and your family during this difficult time.
Comment Share
Share via:
SL

Posted Dec 08, 2020 at 04:59pm
I learned today that Jose has passed away and it made me sad as he always had a smile on his face and would stop in my office at work to discuss football with me. He knew I was a huge KC Chiefs fan. We also discussed his living in CA for a long time as my son lives in Southern California today. His sweet smile will be missed by many people. I know he touched my soul. I am so sorry to his family as he was such a good man. Donna Harden, Midwest Independent BankersBank
Comment Share
Share via: 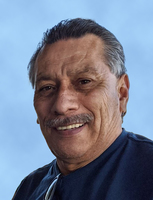