To share your memory on the wall of Joseph Rozier, sign in using one of the following options:

He was born on June 28, 1946 in Hawkinsville, GA a son of Mendel Clyde and Lucille Anna (Pirner) Rozier. He married Barbara Ann Ranger on February 1, 1969 and they were the first couple wed at the Cathedral of St. Joseph by Monsignor Poelker.

A lifelong resident of the Central Missouri area, Joe graduated from Helias High School and attended Lincoln University. After college, he enlisted in the United States Air Force and proudly served during the Vietnam War (1966-1971).

Joe was employed as a Heavy Equipment Operator with the International Union of Operating Engineers, Local 513, AFL-CIO. Throughout his career, Joe worked at various job sites and took pride in every project including the construction of the Callaway Nuclear Plant and the Union Pacific Bridge over the Gasconade River. He retired on November 20, 2001.

Joe will be remembered as a hard worker and a great provider. He passed on his working skills to his sons, who have both continued with the family line of business. Joe was a “jack of all trades” and would give the shirt off his back to any family or friend that were in need. He was also an avid outdoorsman enjoying hunting and fishing, and listening to music from the 1950’s and 60’s.

He was preceded in death by: his parents; his brother-in-law, Steve Rademan; and his nephew, Mike Rademan.

Mass of Christian Burial will be held at 11:00 am Wednesday at St. Peter Catholic Church with the Reverend Joseph Corel officiating. Entombment with military honors will follow at the Mausoleum of Resurrection Cemetery.

In lieu of flowers, memorial are suggested to the School Sisters of Notre Dame.

To send flowers to the family or plant a tree in memory of Joseph Rozier, please visit our Heartfelt Sympathies Store.

We encourage you to share your most beloved memories of Joseph here, so that the family and other loved ones can always see it. You can upload cherished photographs, or share your favorite stories, and can even comment on those shared by others.

Jefferson City Track and Field and Westphalia Knights of Columbus have sent flowers to the family of Joseph Rozier.
Show you care by sending flowers

Posted Dec 04, 2019 at 07:27am
Sorry for your loss you and your family are in our prayer from the Jefferson City Track and Field Family 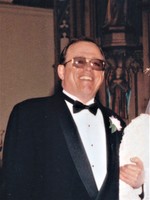