To share your memory on the wall of Julian Hargus "Zip", sign in using one of the following options:

Provide comfort for the family of Julian Hargus "Zip" with a meaningful gesture of sympathy.

Zip was a 1957 graduate of Marshfield High School and went on to earn his degree in Psychology in 1975 from Missouri State University.

Zip proudly served in the United States Army and was honorably discharged as a Specialist 5 in 1966. Julian was a true patriot from his years serving our country. His favorite colors were those of our flag and he flew it proudly.

He was employed by the State of Missouri with the Employment Security Division as an Area Supervisor. Zip worked for 35 dedicated years prior to his retirement in 1999.

He was a man of faith, holding membership at the Marshfield First Christian Church. He was also a member of the Lion’s Club and the National Rifle Association.

Zip enjoyed being outdoors soaking up nature and that love came from his younger years when he loved spending weekends fishing and camping. He was a gifted craftsman in the wood shop, had an impressive coin collection and a travel bag ready to head to Branson, Mo., Michigan, Marshfield, Mo. or anywhere else the family may decide to travel. Zip was known for a healthy sense of humor and enjoyed making others laugh. He looked forward to family gatherings where everyone was together sharing meals. He was known to tell a story or two that would always keep everyone’s attention. To Zip, there was no greater gift than the love of family.

He was preceded in death by his parents, Clyde and Ruby and his sister, Clydene Reznicek.

Visitation will be at Freeman Mortuary from 2:00 p.m. until 3:00 p.m. Saturday, January 19, 2019 with his memorial service following at 3:00 p.m. Saturday in the Freeman Chapel. Military honors will follow his service.

To send flowers to the family or plant a tree in memory of Julian D. Hargus "Zip", please visit our Heartfelt Sympathies Store.

Receive notifications about information and event scheduling for Julian

We encourage you to share your most beloved memories of Julian here, so that the family and other loved ones can always see it. You can upload cherished photographs, or share your favorite stories, and can even comment on those shared by others.

The Brumback Family sent flowers to the family of Julian D. Hargus "Zip".
Show you care by sending flowers

Posted Jan 19, 2019 at 01:17pm
Dear Stan and Lisa and family,
This picture of Zip has that Hargus smile and brilliant eyes. He was one of the first Mensa and super smart people I ever met. His stories of his time in Turkey elevated him to super spy in my mind. I am sad to hear of his passing. I know many stories will be remembered today. Thinking of the entire clan during this time.
Comment Share
Share via:
W

Posted Jan 09, 2019 at 07:44pm
Linda and boys,
I remember sitting at your table, drinking coffee, smoking, and swapping stories with Julian. He always made me smile . Time passed and distance didn't allow many visits, but I always considered him a good friend.
Comment Share
Share via:
GM

Posted Jan 09, 2019 at 01:13am
Linda and family, on behalf of the California cousins, I send our sympathy for your loss. I did not know Zip as he was one of my oldest cousins, but I feel sad to read all of the wonderful things being said about him and that I missed out on knowing him. We have made a donation to the http://centralmissourihonorflight.com/ in honor of Zippy. Love, Gay and CA Cousins
Comment Share
Share via:
LM

Posted Jan 05, 2019 at 05:27pm
Linda, Diana and Robert my most heartfelt sympathies are with you for your loss. Zip (he’ll always be Zip to me) was a wonderful man and so darn funny. You couldn’t be in his presence without smiling. He always had a good story or hilarious joke. I will be forever grateful to him and all of you for opening your home so many years ago. You have always been and will always be family to me. Hugs and prayers to all of you. LuAnn
Comment Share
Share via:
J

Posted Jan 05, 2019 at 12:33pm
Linda and family , We want to express our deepest sympathy at the passing of Julien. He was such a kind and interesting fellow. Always greeted you with his bright smile and words of encouragement. He will sorely be missed by those who knew him . We will not be able to attend the funeral but wanted you to know our thoughts and prayers are with you in your time of grief. May God bless , Allan and Judy.
Comment Share
Share via: 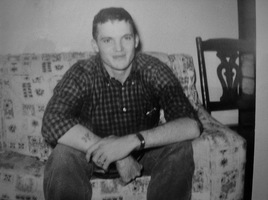