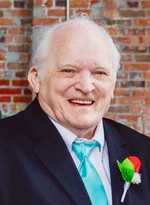 Zip was a 1957 graduate of Marshfield High School and went on to earn his degree in Psychology in 1975 from Missouri State University.

Zip proudly served in the United States Army and was honorably discharged as a Specialist 5 in 1966. Julian was a true patriot from his years serving our country. His favorite colors were those of our flag and he flew it proudly.

He was employed by the State of Missouri with the Employment Security Division as an Area Supervisor. Zip worked for 35 dedicated years prior to his retirement in 1999.

He was a man of faith, holding membership at the Marshfield First Christian Church. He was also a member of the Lion’s Club and the National Rifle Association.

Zip enjoyed being outdoors soaking up nature and that love came from his younger years when he loved spending weekends fishing and camping. He was a gifted craftsman in the wood shop, had an impressive coin collection and a travel bag ready to head to Branson, Mo., Michigan, Marshfield, Mo. or anywhere else the family may decide to travel. Zip was known for a healthy sense of humor and enjoyed making others laugh. He looked forward to family gatherings where everyone was together sharing meals. He was known to tell a story or two that would always keep everyone’s attention. To Zip, there was no greater gift than the love of family.

He was preceded in death by his parents, Clyde and Ruby and his sister, Clydene Reznicek.

Visitation will be at Freeman Mortuary from 2:00 p.m. until 3:00 p.m. Saturday, January 19, 2019 with his memorial service following at 3:00 p.m. Saturday in the Freeman Chapel. Military honors will follow his service.