To share your memory on the wall of Kathie Berger, sign in using one of the following options:

Provide comfort for the family of Kathie Berger with a meaningful gesture of sympathy.

She was a 1968 graduate of La Junta High School and a 1972 graduate of Park College (now University), where she met her husband. It was there that she earned a Bachelor’s of Arts in History, a passion she maintained throughout her life.

Kathie served in the United States Army Reserves in a medical unit. While in training with the Women’s Army Corps (WAC), Kathie took courses through Baylor University where she furthered her medical laboratory education.

As a veteran, Kathie had a deep love for her country. She was a dedicated patriot who believed it was her duty to help the country live up to the promise it made to all its citizens.

After moving to Jefferson City in 1978, Kathie went to work for Charles E. Still Hospital. She was employed as a Microbiologist with Still (later Capital Region Medical Center); she was a member of this team for thirty years until her retirement in 2012.

Kathie enjoyed straw bale gardening and native plants, an interest she pursued by completing the Master Gardener’s course. A lifelong learner, she was often found reading, doing genealogy research, and studying history. She particularly enjoyed getting lost in bookstores. Kathie was a devoted Democrat and was known for advocating for human rights.

Kathie was a selfless woman who was passionate about helping those in need. She shaved her head three times for the St. Baldrick’s Foundation in order to raise money for childhood cancer research. She shaved most recently this past April at an event in Lee’s Summit, Mo. She also supported her nephew Stephen’s charity, Road Warrior Foundation, which provides adventure therapy to veterans with disabilities.

She had a deep love for the western United States and often planned vacations to see the majestic beauty of our National Parks. She particularly loved sandhill cranes, antelope, and otters. Some of her fondest memories were spent visiting her sister in Monterey Bay. Kathie’s family will miss her sense of humor and love for life.

She was preceded in death by her parents and a sister-in-law, Joan Berger.

A Celebration of Life will be conducted at 2:00 p.m. Tuesday, July 23, 2019 in the Freeman Chapel with Celebrant Gara Loskill officiating. Military honors will follow her service at the funeral home.

We encourage you to share your most beloved memories of Kathie here, so that the family and other loved ones can always see it. You can upload cherished photographs, or share your favorite stories, and can even comment on those shared by others.

Posted Jul 22, 2019 at 10:02am
Dear Bruce and family, We are very sorry to hear of your loss. Losing a spouse or a parent is so very difficult. Our prayers are with you at this sad time.

Posted Jul 22, 2019 at 09:09am
Dear Bruce
Marilyn shared this unexpected and tragic news with me yesterday and Jay has it also. It will go out.

Nothing can fully prepare us for the loss of a beloved spouse. It forces us into a new chapter that can be difficult to navigate.

Kathie's wry sense of humor never ceased to amaze and amuse me -- you two were such a perfect match.

I send you my affection, Bruce and wish you strength and peace.

Posted Jul 21, 2019 at 10:04pm
Bruce, Jessie, Aaron, Tom, and Cheryl, We are thinking of you during this difficult time. Kathie will be missed. All our love, 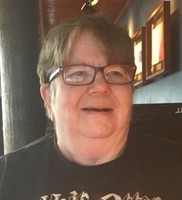