To share your memory on the wall of Kenny Walker, sign in using one of the following options:

Kenny served in the United States Army during the Korean War. He was honorably discharge in October 1954 as a Corporal.

He was employed as an Automotive Technician with the Missouri State Highway Patrol for twenty-nine years prior to his retirement in 1995.

Kenny was an active member of First Assembly of God. He possessed a strong faith, which was his guiding principles throughout his simple life. He instilled in his children those same values of faith, hard work, and caring for others.

To say that he was an avid Cardinals fan is an understatement. He cherished rooting for his beloved team and could be caught wearing his cardinal hat most days. He also loved traveling with Iva during their retirement. On a whim they would hop in their car and travel our beautiful country. Some of their favorite places were the Smokey Mountains, Maine, the Upper Peninsula in Michigan and visiting their son in Georgia. Family was always the center of his life and he cherished time with them, especially when he could take them all out for dinner.

Survivors include: three children, C. Wesley Walker and his wife Renee of Flowery Branch, Ga., Susan L. Glawson and her husband Keith of Tuscumbia, Mo., and Lynn M. Saucier and her husband Randy of Holts Summit, Mo.; one sister, Rosemary Strobel and her husband Herb of Lohman, Mo.; two grandchildren, Abigail Glawson and Logan Saucier; and several nieces and nephews.

He was preceded in death by his parents; his loving wife of 51 years, Iva; and two brothers, Bill Walker and Ira Walker.

Funeral services will be conducted at 2:00 p.m. Wednesday, September 18, 2019 at First Assembly of God with the Reverend Lowell Perkins officiating. Graveside services and interment with military honors will be held at Mt. Pleasant Cemetery in Hartsburg, Mo.

To send flowers to the family or plant a tree in memory of Kenny Walker, please visit our Heartfelt Sympathies Store.

We encourage you to share your most beloved memories of Kenny here, so that the family and other loved ones can always see it. You can upload cherished photographs, or share your favorite stories, and can even comment on those shared by others.

Team EBS sent flowers to the family of Kenny Walker.
Show you care by sending flowers

Posted Sep 16, 2019 at 03:18pm
Please accept our most heartfelt sympathies for your loss... Our thoughts and prayers are with you and your family during this difficult time.

The FTD Comfort Planter was purchased for the family of Kenny Walker. Send Flowers 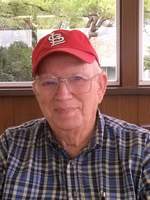