To share your memory on the wall of Larry Rizner, sign in using one of the following options:

Larry grew up in Freeport, Il., where he was a 1957 graduate of Freeport High School.

He served our country for three years as a 2nd Class Aviation Electrician Mate in the United States Navy until he was honorably discharged in January 1963. Larry’s service didn’t stop there. He served for 40 years with the Cole Country Fire Protection District, where he rose to the rank of Captain and was the founder of the CCFPD Honor Guard.

In 1995, Larry retired as a salesman from the Smeal Fire Apparatus where he would do demonstrations and teach fireman how to use the gear. During his civilian career, he also worked at Menu Maker Foods, Tom’s Snacks, and Tower’s Fire Apparatus. During his time selling fire supplies, he made many great relationships with fire departments around the state and participated at the University of Missouri Fire School.

Larry was a faithful member of Central United Church of Christ and volunteered with many different projects through that involvement. He was always willing to help with dinners served at the church and to work at the upkeep of Camp Aurora, near Bennett Springs.

He loved spending time with his wife and they both had a passion for traveling and camping. They especially enjoyed the tranquility of the outdoors while tent camping and later in a camping trailer. Their favorite destinations were Glacier National Park and Big Bend National Park. They also made various regional trips, and went on a few trips with the Good Sam’s Camping Club.

Larry’s main passion in life always revolved around spending time with his family. He cherished the time he was able to spend watching his sons grow up. He was a fixture at his boys’ JCSC swim meets, Jay’s Wrestling matches, football games, and the JCHS Student Council events. He enjoyed making trips up to Iowa and Wyoming where his sons went to school. He later visited Tim at his many posts in the United States Navy and Marine Corps. In his later years, his attention was shifted to the many events and activities with his grandchildren including football, baseball, soccer, basketball, as well as the many other “projects” that his grandchildren had found for him.

Larry was preceded in death by his parents and loving wife of 47 years, Judy.

A private memorial service will be conducted on Monday, January 4, 2021 in the Freeman Chapel with Chaplain Jim Mueller officiating. Military honors and honors from the Cole County Fire Department will follow his service.

A webcast of Larry’s service will begin at 11:00 a.m. Monday for extended family and friends that are not able to attend by going to his memorial page on Freeman Mortuary’s website. Friends may mail sympathy cards to the funeral home or leave condolences online to be given to his family.

In lieu of flowers, memorial contributions are suggested to the Cole County Fire Protection District.

To send flowers to the family or plant a tree in memory of Larry A. Rizner, please visit our Heartfelt Sympathies Store.

Receive notifications about information and event scheduling for Larry

There are no events scheduled. You can still show your support by sending flowers directly to the family, or planting a memorial tree in memory of Larry A. Rizner.
Visit the Heartfelt Sympathies Store

We encourage you to share your most beloved memories of Larry here, so that the family and other loved ones can always see it. You can upload cherished photographs, or share your favorite stories, and can even comment on those shared by others.

Posted Jan 06, 2021 at 09:35pm
Thank you Tim & Chad for allowing the video of your fathers service to be seen by so many. You boys were blessed with awesome parents, allow that love to carry you in life. I will never forget two of the greatest people in my life Larry & Judy Rizner. Fly with Angels.
Comment Share
Share via:

Posted Jan 04, 2021 at 05:25am
Chad and Tim, I drank Coffee with your dad for over 30 years about every morning. First at Dunkin Donuts and then Mc Donalds, An I know he is having a wonderful reunion with Judy! You two made him so proud! Larry was a great man an he will be missed by many of us! My our Lord hold you close during this hard time in your lives. God Speed ole friend. Gonna Miss that smile and Laugh.
Comment Share
Share via:
GE

Posted Jan 03, 2021 at 01:46pm
We will miss Larry and his calm , steady manner. He was a faithful member of Central United Church of Christ. He and Judy were good friends from the time they arrived in Jefferson City. He was a good loyal, faithful, and helpful friend over the years. He was a dedicated veteran and an active and productive member of the Cole County Fire Protection District where he actively and faithfully served for many years. The District benefited from his extensive knowledge and dedication to service. Our sincere and deep sympathies to his family. His memory will be with us and we are thankful for him being in our lives. God bless. Greg and Marian Eskijian, Brian Eskijian and family, Karen E. Thompson and family.
Comment Share
Share via:

Posted Dec 31, 2020 at 09:11pm
Chad & Tim once again in the passed few days someone who was special has passed away. Your dad was such an awesome fella. I will remember our time spent at the lake, hearing your dad laugh & watch his eyes when he was you boys or your mom. I was privileged to know Larry, he was such a good man. Fly with Angels my friend.
Comment Share
Share via:
WR 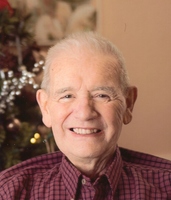