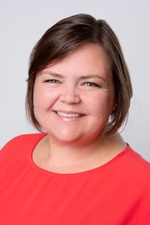 She was born on September 13, 1980, at Boone Hospital to William Merill and Lucile (Wohlt) Lockwood. The family moved to Jefferson City in 1983, and Lauren was a 1998 graduate of Jefferson City High School. She attended the University of Missouri and spent a semester at Universidad Iberoamericana in Mexico City, graduating from Mizzou with a degree in Spanish education in 2003.

While she was growing up, she played recreation league and school softball, basketball, ice skated and swam competitively. Skills from the latter eventually enabled her to complete her lifeguarding and water safety instructor certifications. Lauren was baptized in Columbia, confirmed at First United Methodist Church, and sang in the Wesley Choir. She served on two Volunteers-In-Mission teams that went to Mexico and served as a translator. She also played viola throughout high school and for the Jefferson City Symphony.

Her life-long involvement with Girl Scouts began as a Brownie and continued all the way through Senior Girl Scouts, earning the Silver Award as a Cadette. She started as a camper at the Girl Scout’s Camp Pin Oak and worked her way into the role of counselor with the camp name of “Suzy.” She loved to sing, had a beautiful voice, and used it to lead camp songs of which she had a significant repertoire. We often joked that she used high school and college as a filler between summer camp sessions which were her passion. Her life motto developed at camp was, “To make a positive difference while I’m here on this planet,” which she followed, always more concerned about others than herself.

Following graduation from MU, Lauren began her career as a title clerk with Guaranty Land Title until an opportunity presented itself in 2005 to direct day camp at Seacamp, a resident marine science education training center on Big Pine Key, Florida, where she lived on a house boat. Lauren returned to Missouri in 2009 and immediately began working at Veterans United Home Loans, in roles including senior project manager and loan officer coordinator. She was proud of VU and the good work the company did in the world and her contribution to it. In her words she was, “Doin’ what I do at The Awesome Place”, helping veterans.

Lauren’s “larger than life” personality began as a table top dancer at ShowBiz Pizza at the age of 2. Her friends and family agreed that she was one of the funniest people that they knew with a warm and generous heart to boot. A skilled writer, many felt she missed her calling by not writing for or performing stand-up comedy. Though she never had children of her own, she loved kids and took a special interest in those of her friends. She was imaginative and creative which was expressed through her craft projects and in her home which she and her dad collaborated to rehab.

Lauren loved the outdoors, camping, floating, and kayaking on her “River Pickle”, hiking with her dog, flowers, and animals. She also relished trivia contests and enjoyed a good game of poker.

In lieu of flowers, the family suggests memorial donations to the Cosmopolitan International Diabetes and Endocrinology Center at MU, Capital Region Medical Foundation, the Veterans United Foundation, or the Jefferson City Animal Shelter.